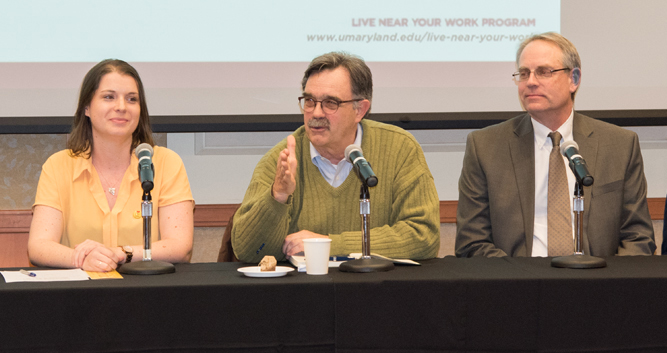 The University of Maryland, Baltimore’s (UMB) improved Live Near Your Work (LNYW) Program has produced about one new homeowner per month since it launched in January. From Hollins Market to Pigtown to Barre Circle, the doors to homeownership are swinging open for UMB employees in Southwest Baltimore.

The key to the program’s success is the upgraded $18,500 grant, which consists of $16,000 from the University and $2,500 from the city of Baltimore. And the commitment of UMB leaders such as President Jay A. Perman, MD, and chief business and finance officer and vice president Dawn Rhodes, MBA, has been instrumental.

But the program’s community partners deserve kudos, too, for their efforts to help UMB employees navigate the sometimes difficult purchasing process that moves from shopping to sale to settlement. In addition to the city of Baltimore and its Housing Authority, the partners from the nonprofit sector aiding the LNYW Program are Live Baltimore, the Southwest Partnership, and GO Northwest Housing Resource Center.

When it began considering a relaunch of the LNYW Program, which used to offer incentives totaling $5,000 and was little used, the University realized it needed stronger partners to support the homebuying process, Rhodes says. “We quickly understood that UMB didn’t have the knowledge base that a group like Live Baltimore has to assist our employees with securing other assistance that is available for buying a home,” said Rhodes, who called the nonprofit “an irreplaceable asset to our LNYW Program.”

“With this partnership, it was really important to have the ability to help people from start to finish in the process,” said Liz Koontz, program director at Live Baltimore. “And then the University was able to make a partnership with the city of Baltimore, as well, so that the city is able to cut both sides of the check at settlement. We’ve been able to make it a really smooth process for UMB employees.”

Live Baltimore has facilitated homebuying education sessions with University employees, and program manager Ross Hackett has spent about 70 hours on campus directing group and one-on-one sessions. The meetings cover other incentives that could be stacked with the UMB grant, information about the seven qualifying neighborhoods, and the properties for sale in those communities — Barre Circle, Franklin Square, Hollins Market, Mount Clare, Pigtown/Washington Village, Poppleton, and Union Square.

Live Baltimore also sponsored a neighborhood trolley tour in January soon after the LNYW relaunch, an event that was well-attended and well-received by UMB employees.

“I didn’t know any of the neighborhoods affiliated with the program,” said Tara Wells, a program administrative specialist in the Department of Organizational Systems and Adult Health at the School of Nursing who bought a home in Pigtown using the LNYW grant. “The trolley tour really helped me get a feel for the neighborhoods.”

Steven Douglas, MA, MLS, was a Hollins Market renter before becoming a Hollins Market owner, so he knew all about the neighborhood, but he said the tour had a side benefit. “It gave me an opportunity to interview real estate agents,” said Douglas, head of collection strategies and management at the Health Sciences and Human Services Library.

Added Hackett: “The January trolley tour in particular was special because we designed it to feature those seven neighborhoods. So if people were just learning about the program and considering living in one of those neighborhoods, they had the opportunity to see them all and learn about them at one time.”

Checking Out the Inventory

The Southwest Partnership’s involvement, meanwhile, included sponsoring a housing fair in March that gave prospective buyers a chance to assess the housing inventory among the seven targeted neighborhoods. Karen S. Park, MBA, MA, chief of staff to Rhodes, says the Southwest Partnership, led by Executive Director Michael Seipp, has been an invaluable contributor.

“Michael has assisted in coordinating UMB’s participation in several housing fairs within the Southwest Partnership community, two of which were specifically targeting UMB employees,” Park said. “These activities have allowed our team to connect employees with real estate agents, community association leaders, and developers to better understand each community as well as the housing availability in each neighborhood.”

Before signing a contract of sale, employees wishing to use the LNYW grant must obtain a homeownership counseling certificate in a two-step program provided by a HUD-certified agency. UMB’s partner for this parameter is GO Northwest Housing Resource Center, which has offered workshops that touch on building credit, choosing a lender, buying homeowners insurance, and other issues. Employees are free to use another agency if they wish.

“Our partnership with GO Northwest has assisted many employees in obtaining their homeownership counseling certificate,” Park said. “All employees who participated in their workshops obtained one-on-one financial counseling, which, when coupled with the programs provided by UMB Human Resource Services, has enabled many of them to stabilize their financial status to apply for credit and save for the down payment.”

‘Near’ Is the Operative Word

Live Baltimore partners with other institutions in the city to promote homeownership in Baltimore. One aspect of UMB’s program that makes it special, Hackett says, is the proximity of the University to the targeted neighborhoods.

“The seven neighborhoods are literally in walking distance of UMB,” Hackett said. “That really drives home the idea that the place where you work could also be the community in which you live. What we’ve learned is that these communities are extremely neighborly, their biggest strength is the connection among residents, and everyone’s committed to the community in which they live.”

And how do the folks at Live Baltimore feel when another home goes to closing?

“We get really excited when we hear that, especially when someone we’ve worked with closely gets the grant,” Koontz said. “It’s life-changing for them, and we’re just happy we can be a part of that. All of these incentives really help people get into the house without needing to have tens of thousands of dollars on hand, and that was UMB’s point in improving the program.”

Said Hackett: “That’s the news we like to get, and these appointments were especially fun for me because people are generally in good spirits when they know they are eligible for $18,500 in grants and possibly more on top of that. I’m thrilled to hear that people are settling and utilizing the grant.”

Read about UMB employees who have bought houses using the LNYW grant at The Elm website.

Read more about the program at the LNYW website.