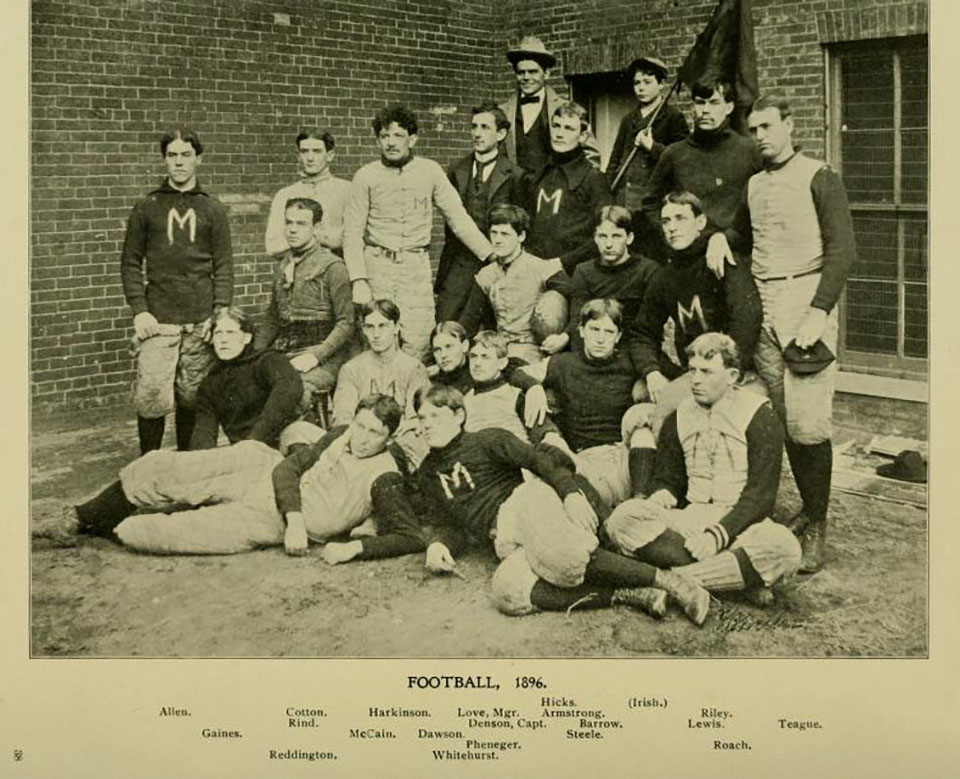 As we count down the days until the New England Patriots and Los Angeles Rams face off in Super Bowl LIII on Sunday, Feb. 3, what better time than now to revisit the history of football at the University of Maryland, Baltimore (UMB)? While it’s no longer a club or University sport, football, as well as other team sports such as ice hockey, was once supported at UMB.

Football at UMB was first organized by Dr. Norfleet Mann Gibbs, University of Maryland School of Medicine Class of 1896. Gibbs was called “the father of athletics at the University of Maryland,” by the 1896 Bones, Molar, and Briefs yearbook. The first team was fielded at midseason in 1895, playing two games against St. John’s College of Annapolis and City College of Baltimore. The following year, the Athletic Association of UMB was formed among faculty and students at the school. The association elected team managers and coaches for football, baseball, and hockey. Teams had no practice fields, no financial support, and at times little enthusiasm or backing from students or faculty, yet they played an average seven games a year with some success.

As time went by, football grew in popularity, yet the financial strain and lack of facilities continued to cause problems. The football team enjoyed a strong rivalry with Johns Hopkins University and occasionally played the Maryland Agricultural College (today’s University of Maryland, College Park).

The demands of coursework and labs worked to the detriment of UMB football teams that suffered from a low turnout of talented players. To put this into numerical perspective, only 2 percent of available students participated in athletics at UMB, while at other schools 10 to 25 percent of students joined teams. By 1908, only 12 years after its founding, the Athletic Association of UMB was disbanded. Football had a small resurgence in 1912 but was again disbanded in 1914. In 1920, when the University of Maryland and the Maryland Agricultural College merged, students at the Baltimore campus could again participate in athletics through the College Park campus. At that time, the football team was led by coach Harry Clifton “Curley” Byrd.

Perhaps while watching Super Bowl LIII, or at the next sporting event you attend, try out some of these Maryland cheers and yells from the 1903 Bones, Molars, and Briefs yearbook.

(Photo: 1896 football team from the Bones, Molars, and Briefs yearbook)