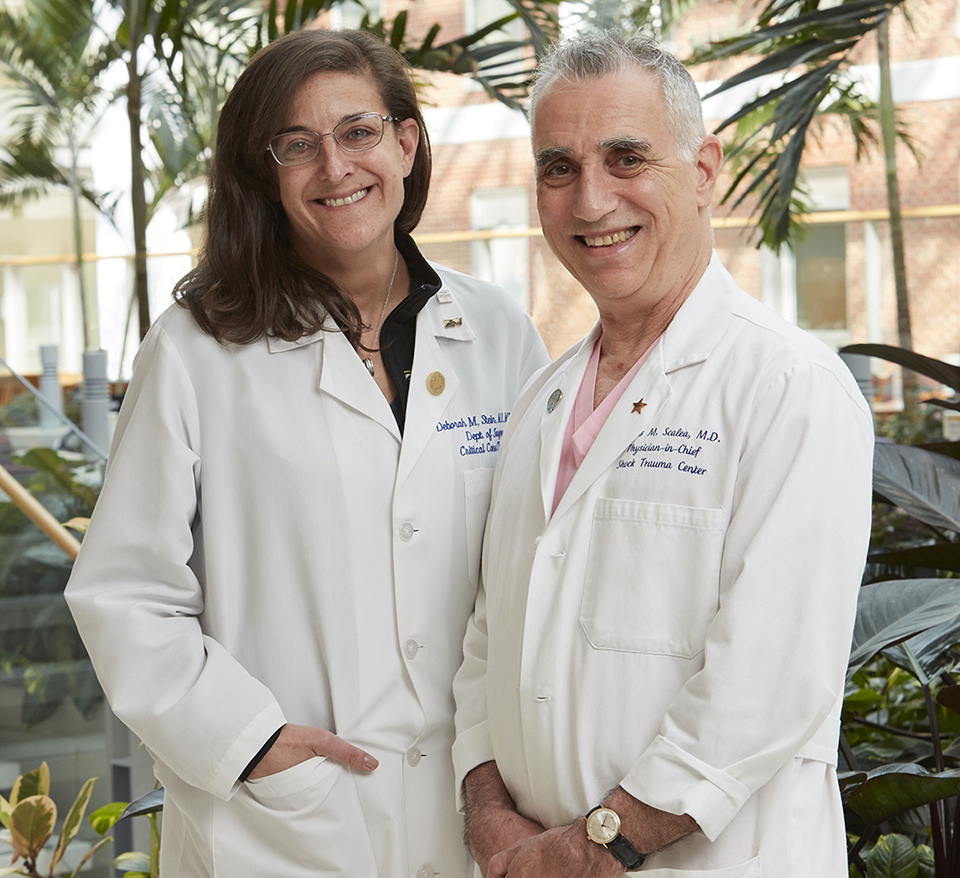 Sign up to attend the Entrepreneurs of the Year presentation and reception.

Today: Entrepreneurs of the Year

Entrepreneurs transform their discoveries into outcomes that benefit the people they serve. In the case of MARS (Molecular Adsorbent Recirculating System), the three physician-scientists listed above have demonstrated how discovery-based clinical innovations can make the difference between life and death for thousands of patients.

Liver failure is a devastating disease that affects around 1,600 patients in the U.S. each year. Modern medicine has developed a variety of devices to support failing organs — ventilators for the lungs, ventricular assist devices for the heart, dialysis for the kidneys. Until recently, there was nothing for the failing liver.

Thanks to these three outstanding physician-scientists and their innovative application of MARS now there is hope. This “dialysis machine for the liver” can remove toxins, improve clotting, and reduce brain swelling. MARS can be used to buy time for the liver to recover. In some cases where recovery is not possible, MARS is a bridge to liver transplant.

In addition to the expertise of Thomas Scalea, physician-in-chief of the R Adams Cowley Shock Trauma Center, Deborah Stein, its chief of trauma, and Steven Hanish, a liver transplant surgeon who has since left Shock Trauma, good old-fashioned luck played a part in Shock Trauma becoming the first to use MARS when a gunshot victim being treated there developed profound liver failure.

“We had heard of the MARS. It seemed like the perfect application. We called the company and it turned out there was one in the area. An institution had bought it but then changed its mind,” Scalea recalls. “The device was on a truck passing through Maryland. I called Karen Doyle [senior vice president at Shock Trauma] and we purchased it that day. It was delivered within hours.”

When the patient and then several more responded to the MARS treatment, which can replace hepatic function in acute liver failure sufferers, Scalea, Stein, and Hanish began a formalized study.

From January 2013 to December 2016, they assessed data from increasing numbers of liver patients, who were referred to Scalea and his team as word spread of their MARS success. At the conclusion of their study, the three reported their encouraging results before the American Surgical Association.

“The results are nothing short of amazing,” says Samuel A. Tisherman, MD, FACS, FCCM, director, Surgical Intensive Care Unit at the University of Maryland Medical Center. “These are patients who surely would have died, but they survive and go on to lead happy, healthy, and productive lives.”

Adds School of Medicine Dean E. Albert Reece, MD, PhD, MBA, “Working collaboratively, Drs. Hanish, Scalea, and Stein have repurposed an existing technology to help extend and, indeed, save the lives of patients who have experienced acute liver failure. They have published the results of their life-saving work with MARS, paving the way for other clinicians to use this device and affect the lives of countless other patients,” says Reece, who is also executive vice president for medical affairs at the University of Maryland, Baltimore (UMB). “Their results using MARS as a bridge-to-transplant could also serve as an important first step in gaining FDA approval for liver transplant recipients.”

One of the foremost authorities in the world on trauma research, education, and clinical practice, Scalea is a seemingly round-the-clock fixture at Shock Trauma, where he has worked 80- to 100-hour weeks since becoming physician-in-chief in 1997. He says he is grateful for the Entrepreneur of the Year recognition of “the wonderful interaction between clinical care and investigation. It is especially meaningful to be recognized in conjunction with Dr. Stein. I have really enjoyed watching her career mature and seeing her develop into a master clinician, administrator, and investigator. Watching our trainees excel makes me know that our specialty is in good hands going forward.”

Stein, who said she was “pleased and honored” by the award and whose national service includes active participation in virtually every major trauma, critical care, and surgical society, paid tribute to Scalea when she was invested as the R Adams Cowley, MD, Professor in Shock and Trauma in May 2016.

Stein, whose father and grandfather were physicians, called Scalea her voice, her conscience, her source of confidence, her mentor in every way. “What can I possibly say to the man who, quite literally, changed my life?” she said of Scalea. “You have trained me to be the best, to provide the absolute best care to patients. You have modeled kindness and compassion and humanity and sympathy and service.”

Hanish, who is now director of adult, pediatric, and living donor liver transplant at the University of Texas Southwestern Medical Center and the Children’s Medical Center of Dallas, recognizes firsthand the hardship that patients must endure while waiting for a suitable organ donor. According to national statistics, the liver transplant waiting list contains nearly 14,000 people — many of whom may die before they can receive surgery.

“MARS allows us to hopefully save those who wouldn’t be saved without the technology,” Hanish says. “The beauty of the system is not the box and cartridges, but how it represents a multidisciplinary/multi-modal approach to a critical care organ failure problem.”

James L. Hughes, MBA, oversees the Entrepreneur of the Year process as UMB’s chief enterprise and economic development officer and vice president, and he says the MARS team’s pioneering spirit symbolizes what the award is about.

“Entrepreneurship combines innovation and impact,” Hughes says. “Through persistence and meticulous research, the MARS team is on the path to turn inspiration to save one life into a new standard of care for thousands of patients.”

Adds Anthony F. Lehman, MD, MSPH, senior associate dean for clinical affairs at the School of Medicine, “We believe that this team is a perfect example of what differentiates UMB and its faculty from other universities: Our collaboration and entrepreneurial mindset is focused on helping the most critical patients when life is truly on the line.”