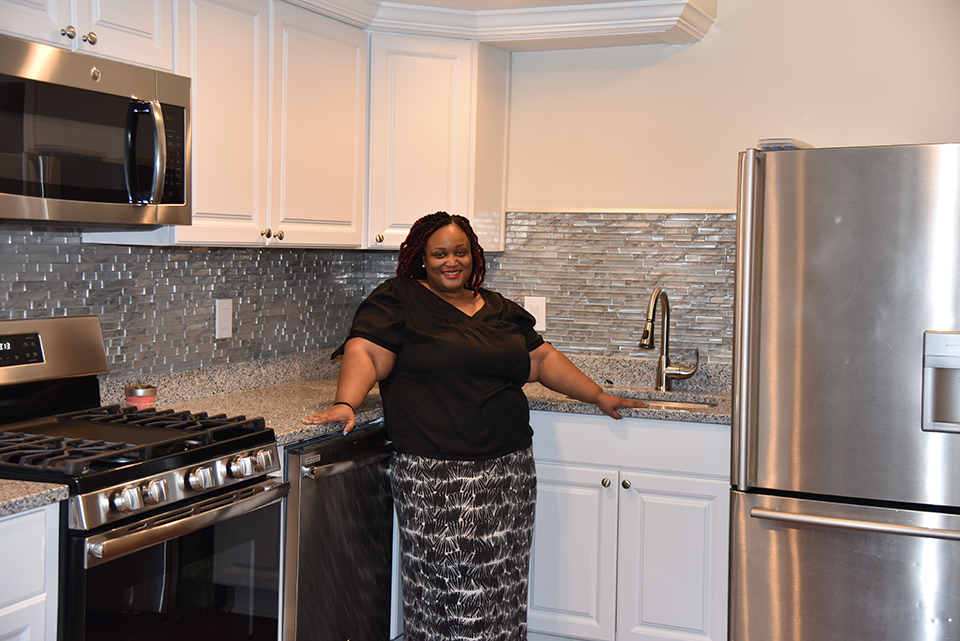 Tara Wells has been on quite a winning streak in the last year, winning the University of Maryland, Baltimore’s (UMB) Employee of the Month Award, getting a job promotion, and, most recently, becoming the proud owner of a rowhouse in Pigtown.

Wells, a program administrative specialist in the Department of Organizational Systems and Adult Health at the University of Maryland School of Nursing (UMSON), is the latest UMB employee to take advantage of the improved Live Near Your Work (LNYW) Program, using the combined grant of $18,500 — $16,000 from UMB, $2,500 from the city of Baltimore — to help purchase her home this month.

“This is surreal. It’s so overwhelming,” said Wells, who describes her LNYW experience, from start to settlement, as sort of a wonderful whirlwind after she decided to abandon a different nonprofit organization’s homebuying incentive program. “I decided in February to go forward with Live Near Your Work. I learned about the incentives, went to the Southwest Partnership’s housing fair in March, looked at homes for sale online, and found my house. I signed a contract April 1 and went to settlement June 1.

“I visited my mother last weekend, and when I was leaving her house, I said, ‘Mom, I’m going home to my house now.’ It still seems a little weird to say that, but it feels great!”

The dream came true for Wells, who also attended a trolley tour of the neighborhoods sponsored by Live Baltimore, one of UMB’s community partners in the program. Living in an apartment in Baltimore County and not being a Baltimore native, she found the trolley tour to be especially helpful as she discovered more of the charms of Charm City.

“I’m originally from Prince George’s County in the D.C. area, so I didn’t know any of the neighborhoods affiliated with the program,” said Wells, who was honored last year as UMB’s September Employee of the Month for her then-role as an administrative assistant II at UMSON. “The trolley tour I took in March really helped me get a feel for the neighborhoods. I’m visual, so I wanted to see where my future home could be.”

Wells says she settled on Pigtown primarily because of a chance encounter with William “Bus” Chambers, a longtime resident who is known as the “Mayor of Pigtown.” She was checking out the neighborhood one evening after work, saw Chambers outside his home, and decided to approach him.

“I introduced myself, he was friendly right off the top, and we talked for two hours,” Wells said. “He told me everything about the neighborhood. I tell him all the time now that he was pretty much my deciding factor on living in Pigtown, because he made me feel so comfortable. The neighborhood is quiet. It’s really peaceful. And the neighbors on my block have been awesome.”

Wells says she had a housewarming party recently, and she has been warming up to the neighborhood, too, checking out the dining establishments around her new digs and in other nearby neighborhoods. She offered praise for Primo Chicken and especially Zella’s Pizzeria, which she calls “amazing.” Living so close to work is great, too, Wells says.

“I get to save on gas and wear and tear on my vehicle, since it only takes me four minutes to drive here,” she said. “I also can go home for lunch if I’d like, and if I stay late for work, I still get home at a decent time. And I can walk or ride a bike to work if I feel like it. I like having the option.”

Wells, who says she stacked a Federal Home Loan Banks incentive of $5,300 on top of the UMB and city funds, is the seventh employee to buy a home with the improved LNYW grant, with seven others in the purchasing pipeline. And there’s room for plenty more, because the University has committed $1.5 million to the program, which means 90-plus employees could take advantage of the LNYW grant.

And to spread that word, the LNYW Program has perhaps its biggest cheerleader in Wells, who would use another title. “I guess you could say I’m a cheerleader, but I’d say I’m more like a public relations person,” she said. “I was just telling a security guard about the program recently, so I have to check to see where his process is. He just got married, and I was like, ‘Go for it!’ ”

Emily Kordish, Human Resource Services benefits manager and coordinator of the LNYW Program, is glad to have Wells’ promotional talents. “I appreciated her genuine sense of excitement throughout the process. She was wonderful to work with,” Kordish said.

The feeling is mutual.

“Each and every person I’ve dealt with in the program was so patient, answered all my questions, and made this process so quick and easy,” Wells said. “I would encourage anyone at UMB to take advantage of this program. I just told another co-worker to hurry up and do it. I said, ‘You’ll be a homeowner, and it’s a great investment.’ ”

Learn more about the LNYW Program at its website, which includes application instructions, neighborhood testimonials, and more, and get a list of upcoming events here. Read about Shea Lawson, the first grantee under the improved LNYW Program, and other grantees’ stories on The Elm.