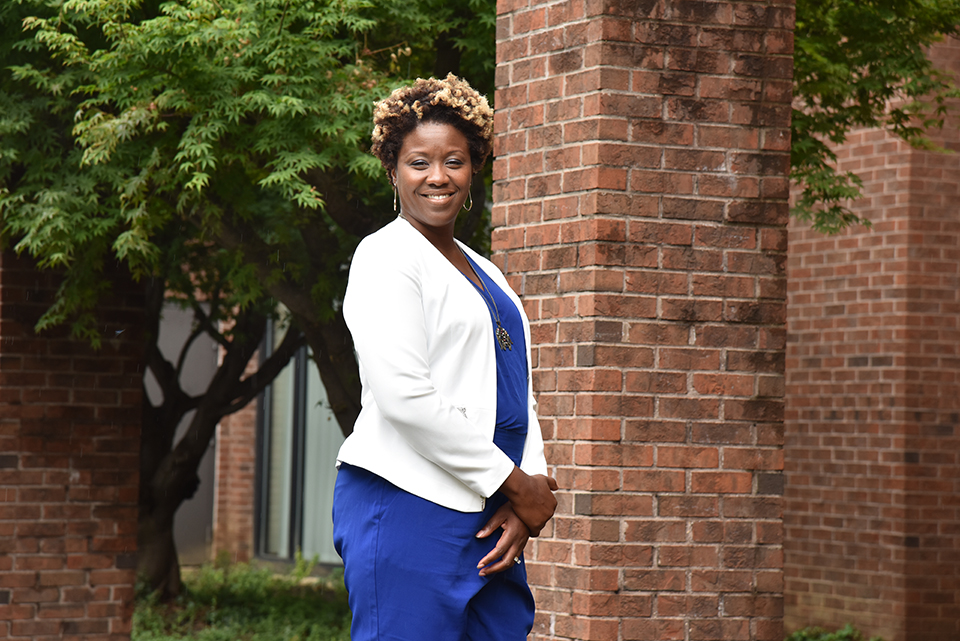 For Cherita F. Adams, MBA, MS, promoting career advancement is more than a full-time job, it’s a mission that extends beyond the workplace.

“Changing someone’s career trajectory can change their life,” says Adams, career development manager in the University of Maryland, Baltimore’s (UMB) Office of Human Resources (HR). “Outside of UMB  — in the community and in my church — I do work to help others seek career advancement. Shirley Chisolm said, ‘Service is the rent that you pay for room on the Earth.’ And I believe when one is given a platform, no matter how big or small, it is their responsibility to use that platform to serve others.”

“Over 50 years ago, Dr. King said, ‘Life’s most persistent and urgent question is, what are you doing for others?’ I often ask myself this very question and hope that my actions are positively contributing to others. And winning this award is proof positive!” Adams says with a smile.

“Dr. King’s words and legacy are timeless. He was courageous and selflessly fought for civil rights and social justice. My mission may not be as big as his was, but nonetheless I am committed to the fight.”

The seeds for Adams’ current mission were planted three years ago, when an HR study showed that nearly three-quarters of UMB employees reported they’d had no positive personnel actions, that there wasn’t sufficient opportunity for career advancement. To address this need, the career development manager position was created, and Adams quickly identified a major issue, particularly for those in lower-paid positions: the lack of basic computer skills.

Adams implemented an Introduction to Computers class that is open to all employees but specifically designed for housekeepers, security guards, and maintenance workers. The eight-week course, which provides an overview of the basic functions of personal computers and how to use them, has produced 20 graduates since its inception in April 2017 and led to a second, more advanced course.

In nominating Adams for the award, Ebony Nicholson, MSW, academic coordinator, diversity and inclusion initiatives, Office of Interprofessional Student Learning and Service Initiatives, says the introductory course has proved popular with UMB employees. And it gets results.

“Several participants have been able to use work email more effectively, independently complete electronic timesheets, improve personal home computing, and apply for positions at UMB,” she says while adding praise for the many hats Adams wears on the job. “Cherita serves as not only program creator, but also as an advisor, planner, coordinator, and collaborator for career services with the intent to build a high-performing and engaged workforce.”

Adams is particularly proud of the introductory class, saying the ability to use a computer is an indispensable life skill.

“One cannot grow their career without increasing their technology competencies,” says Adams, who has worked at UMB for six years. “Creating career ladders without an opportunity to learn requisite skills to ascend the ladder is problematic. So developing the Introduction to Computers class was a targeted learning opportunity for employees who might not otherwise have had an opportunity to sit in a classroom and learn.

“I’ve watched employees not only learn new computer skills that have aided them in applying for new positions, but they also have started new home businesses and can assist their children with homework and teach family members computer skills.”

In addition to the successful computer class, Adams helped to craft a coaching program for female employees through a collaboration with the University’s UMBrella Group. And she has other ideas percolating, including a program she’d like to implement that she calls Passport to Success.

“Passport to Success would be patterned after services provided as part of the workforce stability model aimed at improving the retention of lower-skilled, front-line employees by increasing employee engagement and growth through the removal of barriers that interfere with maintaining employment. As a result, the model aids employees in moving toward greater professional satisfaction and control over their lives.”

As for winning the Diversity Recognition Award, Adams says it was “amazing” to even be nominated, and she appreciates her supervisors for giving her the freedom to craft her position. But the award is about much more than herself, she says.

“It’s more so about the outcome of the work I do and the lives that have been positively impacted,” Adams says. “Removing barriers to employment opportunities is important, necessary work. This award acknowledges that work and its importance while honoring the legacy of Dr. Martin Luther King Jr. I think that’s wonderful.”