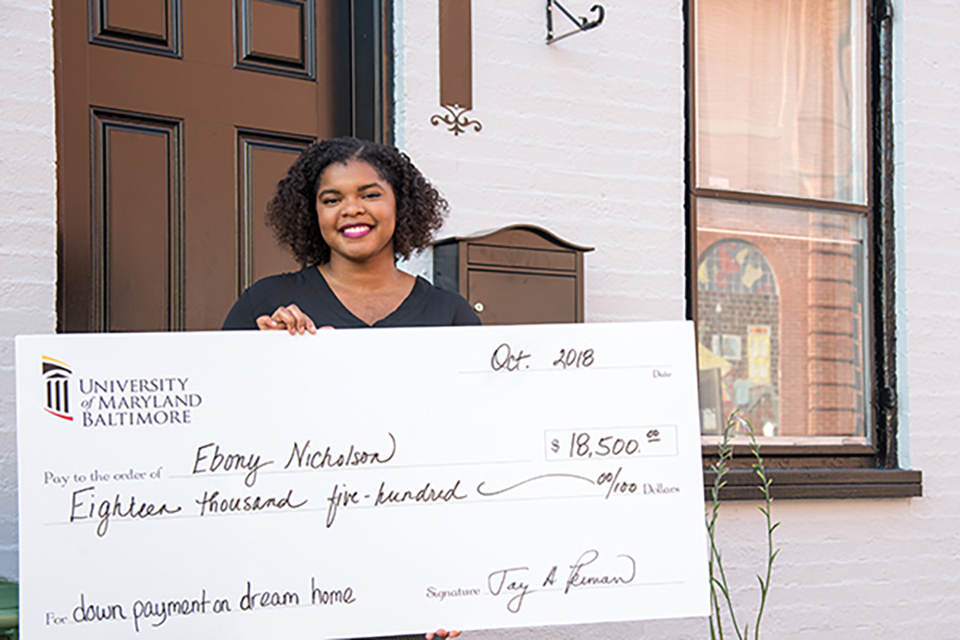 Ebony Nicholson, MSW ’16, didn’t really need to be told about the charms of Hollins Market or sold on the benefits of residing just a short walk from your workplace.

Nicholson, academic coordinator for diversity and inclusion initiatives in the University of Maryland, Baltimore’s (UMB) Office of Interprofessional Student Learning and Service Initiatives, has lived in the Southwest Baltimore neighborhood since 2015, renting a house first as a student at the School of Social Work and then as a University employee.

Now, with help from UMB’s improved Live Near Your Work (LNYW) Program, Nicholson, 28, is a proud Hollins Market homeowner. She is among the most recent recipients of the $18,500 grant ($16,000 from UMB, $2,500 from the city of Baltimore) from the program, which since its launch in late January has helped 13 University employees buy homes amid seven targeted Southwest Baltimore neighborhoods.

“I decided to stay in the neighborhood because I love my community members,” Nicholson says. “Hollins Market is a socioeconomically diverse community, which reminds me to think outside of my personal lens. As a young black woman, it feels good to live in a predominantly black and diverse community. There is a sense of collective responsibility and care for each other that is unmatched in the other communities where I have lived.

“I really enjoy my walks home from work and with my dog because there is always someone with whom to have a quick chat. I know most of the community members by name and at the least by face, and there is nothing like that sense of security.”

Like others before her who’ve utilized the LNYW grant this year, Nicholson says living near her workplace has provided practical benefits. For her, though, the benefits extend into the mental and physical realms.

“Walking to and from work is a part of my meditation. It gives me a chance to take in my surroundings and notice the world around me,” she says. “In a car, things are going by so fast, we often miss the little things. It is also great to have a little physical activity built into my routine.”

Emily Winkler, UMB Human Resource Services benefits manager and coordinator of the LNYW Program, says success stories like Nicholson’s fill her with pride and joy, and she is extremely pleased with the progress of the initiative, which was upgraded from $5,000 per person to $18,500 in January.

“I am getting a steady flow of interest from UMB employees, and many of them are taking the time to find the perfect home,” Winkler says. “This continues to be a rewarding experience, making many of our employees’ homeownership dreams come true.”

Olayinka Ladeji, MPH, PATIENTS Program project manager at the School of Pharmacy, is one of those new homeowners. Ladeji, who used to live in Northwest Baltimore and has worked at UMB for a year and a half, says she is particularly happy with her shortened commute, having bought a house in Washington Village.

“I was most attracted to the interior of the homes I visited in the neighborhood while house-hunting,” said Ladeji, who says she stacked an additional $10,000 in outside grants to her LNYW funds when she closed on the property. “I appreciated all the different resources that were made available to me by the program, including referrals to different organizations in Baltimore that assist homebuyers.”

When it comes to time saved, though, LNYW grant recipient Barbara Andersson takes the commuting cake. A program administrative specialist at the School of Dentistry, Andersson recently bought a home in Barre Circle, leaving her apartment in Kensington, Md., which is about 40 miles away from the UMB campus.

“I had moved to Kensington to work in the dental clinic that we operated at the University of Maryland, College Park site. After that location closed, I had been driving to Baltimore daily,” says Andersson, a six-year UMB employee. “I’ve regained at least 10 or more hours a week by not having to commute in the rush-hour traffic.”

“I spoke to anyone who happened by my desk, especially the dental students, to ask which area they lived in and how they liked it,” she says. “Everyone was so supportive, and I got many positive reviews of the area.”

Meanwhile, another LNYW grant recipient, Tamiko Myles, statistical data assistant at the School of Social Work, is particularly proud to be contributing to one of the program’s stated goals — the revitalization of Southwest Baltimore — after having lived in the city’s Oliver, Northwood, and Westport neighborhoods.

“The communities that are being targeted by this grant are well in need of people who are ready to invest in and improve them,” says Myles, a 20-year UMB employee who moved into a home in Pigtown/Washington Village with her family in July. “With an open mind and that type of readiness, the employees of UMB are those people.”

For more information, check out the Live Near Your Work Program website.

To read more about the program and previous grant recipients, go to this Elm link.