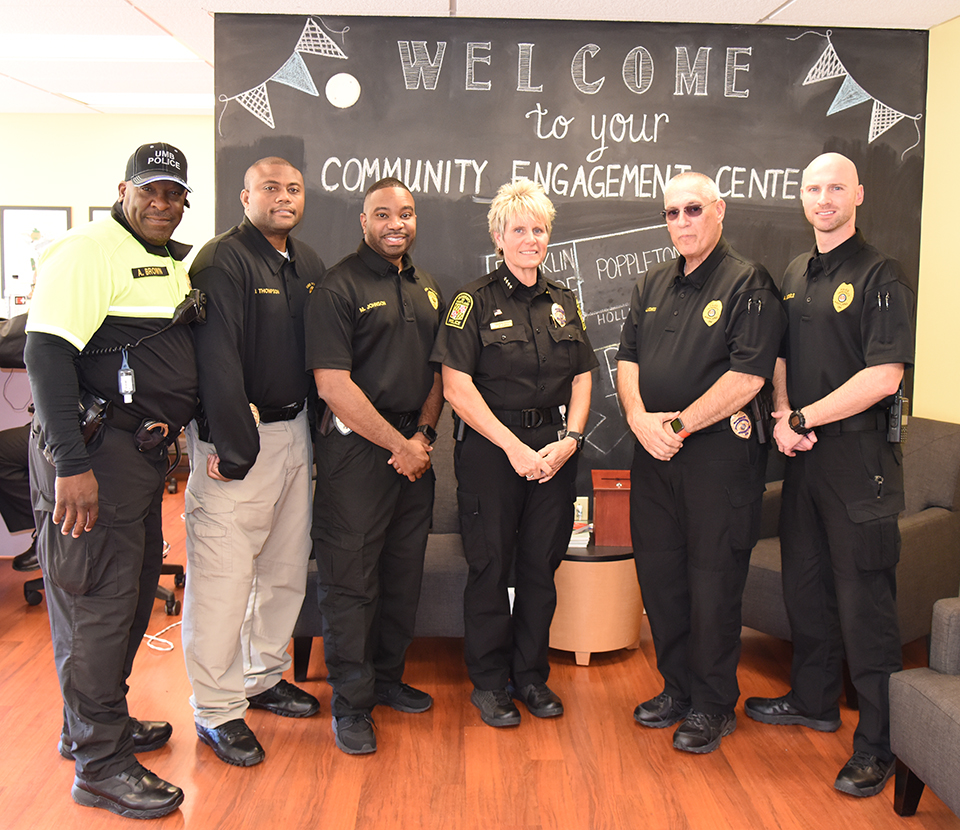 Since taking over as University of Maryland, Baltimore (UMB) police chief in June, Alice Cary, MS, has put her stamp on the force by stressing the need, in her words, “to build community relationships through effective, University-based policing.” To foster those ties, Cary has created a Campus Outreach and Support Team (COAST), a program that will be led by three veterans of the UMB Police Force.

The officer overseeing the team is Lt. Matthew Johnson, an 11-year UMB Police Force veteran who recently was promoted from sergeant. Cpl. Jevon Thompson, MPA, and Acting Sgt. J.R. Jones, who have each been at UMB for more than a decade, will fill the program’s homeless and neighborhood liaison roles, respectively.

The COAST head and two liaisons will serve as key conduits in Cary’s community engagement efforts, collaborating with UMB offices, city of Baltimore police and agencies, and non-governmental entities such as the Southwest Partnership neighborhood association. Cary said that COAST will work out of the UMB Police substation at the UM BioPark and that it’s all part of her goal to have a “robust campus engagement team.”

“There are many different needs from the campus and the community relating to police and public safety, and if we don’t get on the right communications track, the wrong information will be getting out there,” Cary says. “So that’s why we need these liaisons, officers who will actually be hearing about those wants and needs and relaying them back to us.”

As head of the team, Johnson said he plans to use frameworks already in place to continue developing an organizational culture that focuses on police being a part of the community, not simply working in the community. He aims to make sure UMB officers reach out not only in person, but also digitally via social networking.

“COAST streamlines all of our community engagement activities under one umbrella, as opposed to having different programs that aren’t working together for the common goal. The programs are meant to overlap and be cohesive. We are building COAST to be innovative and an example for others to use when designing their community engagement programs. I’m excited and humbled to spearhead something so valuable and paramount.”

‘Compassion in My Heart’

Thompson is a 15-year veteran of the force who stepped up immediately when Cary raised the idea of creating a homeless liaison. “He expressed interest right away, then started doing research and collaborating with the city,” Cary says. “He took the ball and started running with it.”

The plight of the homeless resonates with Thompson, who said he was on the verge of being homeless many years ago when he worked as a waiter. “So I’ve always had compassion in my heart for this population,” he says. “When Chief Cary mentioned she wanted to start this program, it just really sparked an interest.”

The goal of the homeless liaison program is two-pronged: 1) To educate UMB students, faculty, and staff on how to interact with the population; and 2) to guide the homeless on where and how to access social services and other supports through the University, Veterans Affairs, the city, and other agencies.

“A lot of this program will be information sharing,” Thompson says. “A lot of the homeless don’t realize the services that are afforded them. So I do plan to reach out to them, hand out literature, and educate them on where they can go for services that can help them get back on their feet with employment, financial, or housing assistance.

“I plan to inform our department and the University in developing a master list of different referral services, so when our officers encounter citizens on the street, especially homeless veterans, those people in need can be directed toward the services available.”

Cary said the team will collaborate with a case worker from the city’s Law Enforcement Assisted Diversion (LEAD) Program, which launched in 2017 and redirects people arrested for low-level drug offenses to treatment and other services.

“We will have office space available here for the LEAD case worker so that the team and Jevon in particular can work closely with that person,” Cary says. “These type of offenders will get referred to a diversion program instead of jail, and it will help those who are dealing with addiction to address the problem.

“We need to approach the homeless problem in a humanitarian way. A lot of agencies just push them out of a particular area, but that’s just giving someone else the problem and not attacking the issue as it stands. So, this is a start.”

Jones, a 13-year veteran of the force who also worked 30 years as a Baltimore City officer, said as neighborhood liaison it will be his duty to make sure that the needs of the University and Southwest Baltimore communities are heard and understood by the UMB police.

“There are numerous areas around the UMB campus where students, faculty, and staff live,” he says, “so we need to foster better communication and build relationships between the police and those communities. COAST combines the best parts of different programs and has us all working together toward a common goal.”

Cary echoed Jones’ comments, saying it’s important to remember that many UMB students live off campus in these neighborhoods, so their safety concerns and needs must be addressed. She cited results from the National Crime Victimization Survey that show college students are most likely to be robbed when traveling to and from school, specifically between 6 p.m. and 6 a.m.

“We don’t want to lose focus of the students, but our campus is relatively secure, in a broad sense,” Cary says. “It’s the nexus that has the concerns. So we need to make sure we’re addressing not only the core of the University but the areas where a lot of our students live.”

She adds that UMB Police need to be savvy on social media and develop apps that students will use, saying social media is an important tool to keep them informed. “We need to meet students where they are — online,” Cary says. She also hopes to create a public information officer/media liaison to help with disseminating this type of information to the student population and beyond.

Two other UMB Police Force veterans, Pfc. Anthony Brown and Cpl. Andrew Degele, will support the team, and Cary said Jones will work with neighborhood associations such as the Southwest Partnership and will be a point person to attend community meetings in Southwest Baltimore and perhaps other districts in the city.

“There’s a lot of information that’s shared at those meetings, and the Southwest Partnership, for example, has a public safety task force, so we’re going to be part of that,” Cary says. “We need to hear what the citizens want, what our community wants, so by having that information and an open dialogue, we can strategize about how best to tackle these problems.”