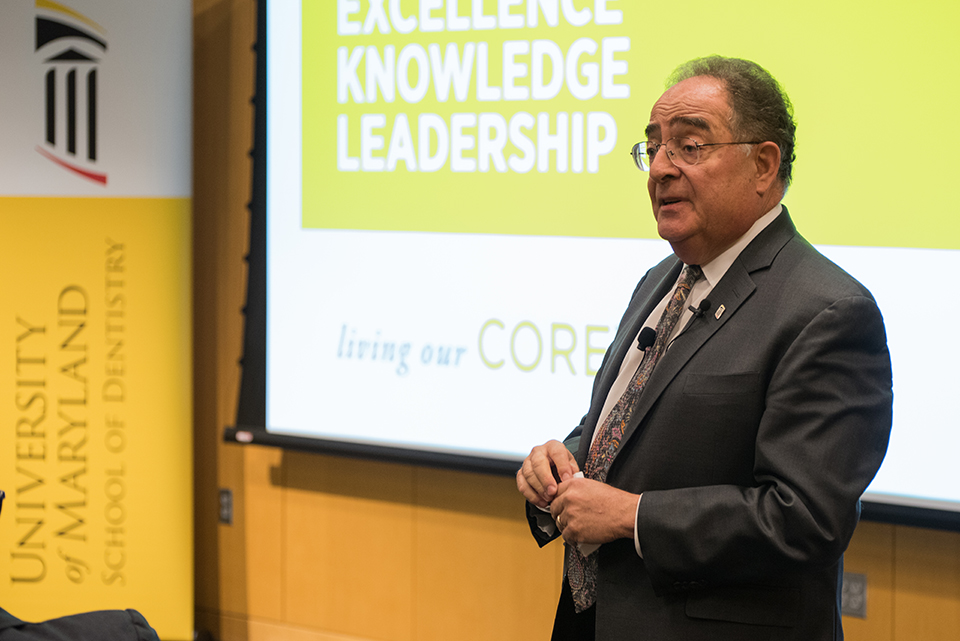 University of Maryland, Baltimore (UMB) President Jay A. Perman, MD, devoted his first quarterly Q&A of 2019 to the issues of Title IX and sexual harassment. Beyond questions, answers, and the start of a new dialogue on these important topics, Perman announced actions he’s taking to promote anti-harassment and gender-equity efforts across the University.

With an eye on short- and long-term results, Perman says he will form a task force to strengthen the University’s anti-harassment policies and practices as well as create a permanent committee to advise him on women’s issues, a group similar to the Diversity Advisory Council he formed that promotes inclusion initiatives at UMB.

“I intend to put forth these working groups in the next 30 days,” Perman told the audience of 100-plus students, faculty, and staff that attended the Q&A on Jan. 17 at the University of Maryland School of Dentistry. “Our Diversity Advisory Council has moved the needle in terms of how we behave with one another and how we respect the differences among us. I regret not having the equivalent of a women’s advisory council, but now I will make that happen.”

Two of UMB’s core values — accountability and civility — are central to these issues and were touched upon throughout the hourlong discussion. In fact, to kick off the Q&A, Perman stood in front of a large screen displaying the seven values and held a framed poster that included their definitions.

“It might sound corny, but I look at this poster every day in my office,” he said. “When I came to UMB as president nine years ago, we put forth a strategic plan and decided it needs to stand on some core values. The matter of mistreatment, sexual harassment, and concerns about retaliation all relate to civility and accountability, but in fact this is a conversation about all of those values.

“I’m going to need the help of everybody on this campus in being committed to saying we live our core values as we tackle this problem. Because there is much work to be done.”

Buskirk said part of OAC’s mission is to respond to and investigate concerns about discrimination, sexual harassment, and Title IX, the law that prohibits discrimination on the basis of sex in any education program or activity that is federally funded. She urged the UMB community to seek out OAC on questions about compliance or ethics via an online consultation form or to report harassment concerns or incidents on the EthicsPoint hotline, a third-party website that is linked at the bottom of umaryland.edu webpages next to a whistle icon.

Saying he understands why many sexual harassment victims don’t come forward, Perman stressed the importance of the hotline, which protects anonymity but allows OAC to reply through a code that lets the complainant respond to follow-up questions if necessary or review the office’s report if one is generated.

“Too often in America victims become the villain, or they’re embarrassed to come forward, and I understand that,” Perman said. “With EthicsPoint, you can have your anonymity and still allow us a way to get back to you. When somebody stands up and complains, they have absolutely every right to get some feedback, and this is a way to do that.”

Kushner, the Title IX coordinator, says her job includes investigating reports of potential violations of the equity law and looking for patterns of discrimination within an institution but that her role goes well beyond those tasks. She described Title IX as a starting point toward taking a broader look at and discussion of discrimination and gender-equity issues.

“That’s why general conversations about civility like this are so important,” Kushner said. “The topic of sexual harassment affects every single person in this room. The conversation certainly can happen through a task force and an advisory committee, but it also needs to happen on the streets, in the hallways, and in our classrooms.”

After Buskirk and Kushner’s presentation, the floor was opened to questions. Several questioners raised the issue of accountability, saying they believed the University has fallen short in creating a harassment-free environment and responding to sexual harassment claims. Perman pledged to do better on both fronts.

“I certainly would acknowledge, for a variety of reasons, that we have not held people sufficiently accountable,” he said. “That’s why I’m standing in front of you. I feel that facts need to be put forward, people have a right to respond — because we are going to respect individual rights — but if wrongdoing is found, then there needs to be a corrective action.”

UMB’s efforts in this area come in the wake of the national #MeToo movement and the University of Maryland School of Medicine (UMSOM) on Nov. 30 launching a “Program in Cultural Transformation,” a major restructuring of its senior leadership positions to ensure that women are represented at the highest levels of the school. The UMSOM program is designed to transform the school’s culture into a national model for a respectful, inclusive, and professional work environment.

With his initiatives, Perman hopes to engage the entire University community in this mission, and indeed a member of the UMB Staff Senate said that group already is working on a campaign to promote civility. Perman welcomed the Staff Senate’s input and asked for suggestions from faculty and students, too, as he forms the task force and advisory committee.

And in responding to a UMSOM student who hoped that the efforts would not be fleeting, Perman promised persistence.

“This is a dialogue, but it’s not a one-and-done dialogue,” he said. “This commitment to gender equity and anti-harassment needs to be in the fabric of our institution, in our DNA. I’m going to do everything I can to make sure that happens. And where I’m falling short, I always count on the students to point it out.”