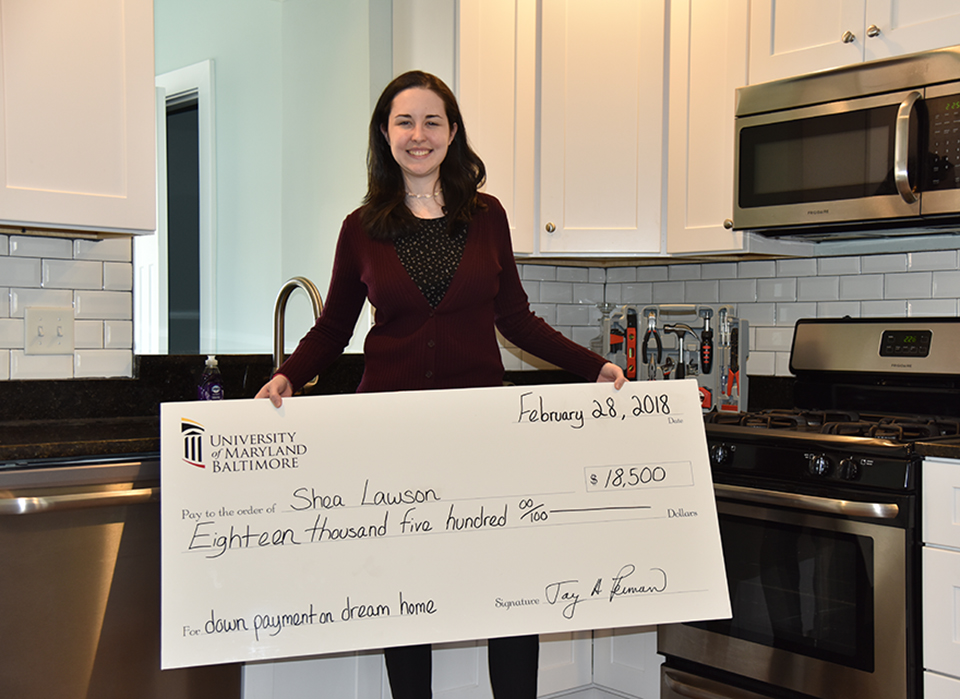 Living in an apartment in Charles Village, near the Johns Hopkins University campus where she went to college, Shea Lawson had to take four buses and sometimes more than an hour to get to and from her job as a research project coordinator at the Brain and Tissue Bank at the University of Maryland School of Medicine.

She wasn’t crazy about the commute or, as she put it, “putting money down the rent drain.” Last fall, she was thinking about buying a house but wasn’t sure she could swing it financially, so she started thinking about shopping for a condo instead.

But when an email touting the University of Maryland, Baltimore’s (UMB) improved Live Near Your Work (LNYW) Program landed in her inbox in early November, her outlook on buying a house brightened. She sprang into action, eager to take advantage of the grant that provides University employees up to $18,500 toward the purchase of a home in seven targeted Southwest Baltimore neighborhoods — Barre Circle, Franklin Square, Hollins Market, Mount Clare, Pigtown/Washington Village, Poppleton, and Union Square.

“I jumped on it pretty quick,” Lawson said of the program, which officially launched Jan. 9. “When I saw the advertisement [in November], I went on the Zillow real estate website, looking at houses in these neighborhoods. I was mostly looking at Pigtown, Barre Circle, and Hollins Market, because I was more familiar with those areas.”

She soon contacted a realtor and toured about 10 houses between late November and mid-January, all while working with a mortgage company to set up the financing for a potential purchase. She completed the program’s required homebuying counseling sessions with UMB’s LNYW partner, GO Northwest Housing Resource Center, attended the employee kickoff event at the SMC Campus Center on Jan. 11, and was among the first to apply when applications opened Jan. 29.

Today, Lawson is the proud owner of a rowhouse in Pigtown, the first grant recipient in the improved LNYW Program, which offers $16,000 from UMB and $2,500 from the city of Baltimore, a dramatic increase from the program’s former $5,000 incentive. The University has committed $1.5 million to the initiative, with hopes that 90-plus employees will take advantage of this financial benefit. Lawson says the program was a perfect fit, opening the door to homeownership and fulfilling her desire to stay at UMB long term.

“I really didn’t have enough for a down payment on a house. I would’ve had to canvass some relatives for a loan,” said Lawson, who has been working at UMB since May 2017. “This allows me to be financially independent. And being near my work was appealing, especially after I decided I wanted to stay at UMB for a while. If it weren’t for this program, I probably would’ve ended up in another rental situation.

“I actually had been trying to get my financials in order to possibly look at condos. I thought that might be the next step for me. A house seemed like a much bigger investment than I initially thought I was ready for. But seeing the Live Near Your Work Program advertised and looking into that, it all of a sudden became feasible.”

Emily Kordish, Human Resource Services benefits manager and the LNYW coordinator, said of Lawson: “Shea was extremely pro-active and resourceful. She really utilized our resources and website and got everything together on her own to get this done. It was a very seamless and positive process working with her.”

Lawson, a city native who went to high school at the Baltimore School for the Arts before earning a bachelor’s degree in history at Johns Hopkins, is thrilled with her purchase, a rowhouse that was built in 1900 and had been refurbished in the past year.

“I didn’t have a specific type of house in mind when I started looking,” she said. “I just looked at everything in my price range and any place that had decent parking options. The house I found has a spacious, open floor plan that still manages to feel cozy and inviting, with solid workmanship on all of the interior features. All of the inside was redone. Half of the basement is finished. And they put a parking pad in the back.”

As for the neighborhood, Lawson says she liked “the close-knit and friendly vibe of the street and block,” and adds that her proximity to M&T Bank Stadium and other downtown attractions was a plus.

“I can see the stadium lit up at night from my back bedroom window, which is a fantastic view for a lifelong Ravens fan like me,” she said. “It will be convenient to my new digs in Pigtown without being overwhelmingly intrusive. It’s the best of both worlds!”

Lawson was extremely pro-active in pursuing the grant, but she also praised Kordish and the program’s partner organizations for helping make her homebuying experience a success.

“It’s been very smooth. The program is run very well,” Lawson said. “Everyone I’ve encountered who’s a part of it — Emily Kordish, Live Baltimore, GO Northwest — they’re very much enthusiastic about it and want to get you the information you need. Also, the Live Near Your Work website has a lot of good information and is really well done.

“I got a lot of help from a lot of good people in the program and from my realtor and my lender — everyone made it easy for me to communicate with them. The Live Near Your Work Program, you can tell they are passionate about this, they want it to work. It’s not just the money UMB has put up, it’s that they’re engaged.”

The Southwest Partnership is holding housing fair Sunday, March 25, that is open to the public and will feature UMB’s Live Near Your Work Program. The fair runs from 11:30 a.m to 4 p.m. Click here to register.

To learn more about the LNYW Program, click here.

To read more about the program’s launch, click here and here.