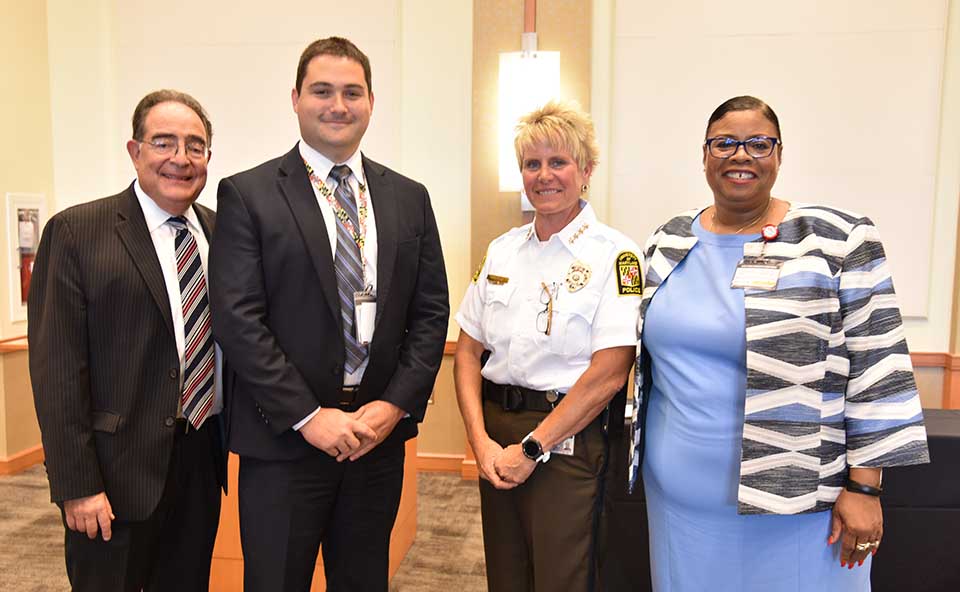 About 250 UMB employees milled about the SMC Campus Center’s Elm Ballrooms to enjoy light fare and get acquainted with Cary and Bratt, who have been on their new jobs for one month and two months, respectively. UMB President Jay A. Perman, MD,  kicked off the ceremony, reminding the crowd that he considers the safety of students, faculty, and staff to be his paramount concern.

“I feel a deep responsibility to everyone who’s chosen to learn and work here. And it eats at me when we have challenges to our safety,” Perman said. “When our campus is safe, our neighborhoods are safer, and the reverse is true, too. And that’s behind so much of the community engagement we do downtown and in West Baltimore. I know that Chief Cary and Mr. Bratt are deeply committed to fortifying our partnerships and our outreach in the city.”

Perman noted that UMB achieved two firsts with the hires: Cary is the first female chief in the UMB Police Force’s 70-year history and Bratt is the University’s first executive director of emergency management. “I think both firsts speak to this University’s evolution, and it’s a proud day for us,” Perman said.

Perman ceded the floor to Dawn Rhodes, MBA, UMB’s chief business and finance officer and vice president, who led the nationwide search to fill both positions. She first detailed Bratt’s credentials, noting his wide-ranging experience as an emergency management professional, educator, and paramedic who changed his career choice from electrical engineering after working as a first responder at Ground Zero after the terrorist attacks of Sept. 11, 2001.

“He wanted to work toward making our nation safe and better prepared,” said Rhodes, who also praised Bratt for his extracurricular activities that include being a volunteer paramedic and firefighter in Baltimore County and an instructor for the Maryland Fire and Rescue Institute.

“How we prepare or respond to emergencies can be viewed as a direct measure of the health of a community,” said Bratt, who most recently served as regional administrator and division director of the Maryland Institute for Emergency Medical Services Systems. “It is my goal to build a program that not only focuses on developing plans and procedures for emergency response that most people think of as emergency management, but also to promote the building of relationships and embed the preparedness mindset into our daily lives.

“Dr. Perman’s State of the University speech in May resonated with me when he spoke of the University as a public good,” Bratt continued. “I wholeheartedly agree and likewise believe that our responsibility to the community doesn’t end at the borders of the campus. It is my hope to build an emergency management program that embodies these values and helps strengthen an already healthy community.”

Rhodes then introduced Cary, who brings 32 years of law enforcement experience to her role, taking her from Michigan to Wyoming to Oregon, where most recently she was patrol operations captain with the University of Oregon Police Department. Rhodes pointed out that Cary is a drug recognition expert, setting records and winning awards for DUI enforcement in Wyoming. She’s also a bit of an adrenaline junkie, Rhodes joked, and enjoys riding her motorcycle — “and it’s a big motorcycle,” the VP said — scuba diving, traveling, and hiking.

Perman, who earlier thanked Capt. Martinez Davenport, MS, for his service as interim police chief since July 2017, was delighted to have the honor of swearing in Cary after the new police chief had spoken to the crowd.

“Thirty-two years of law enforcement have brought me to this threshold, and my passion speaks from within my heart to make sure that we’re all safe and secure on campus,” Cary said. “My engagement style is meeting and greeting and getting feedback from all of our campus partners, both internally and externally. And it takes a community to move forward, so it takes time and it takes effort.

“We have a wonderful police department, and every one of these people brings something to this community, and they need to be recognized as well. It’s not me as police chief, it’s us a whole to ensure our campus community remains safe.”

Learn more about Cary and Bratt.

To see more photos from the July 12 event, go to UMB’s Facebook page.