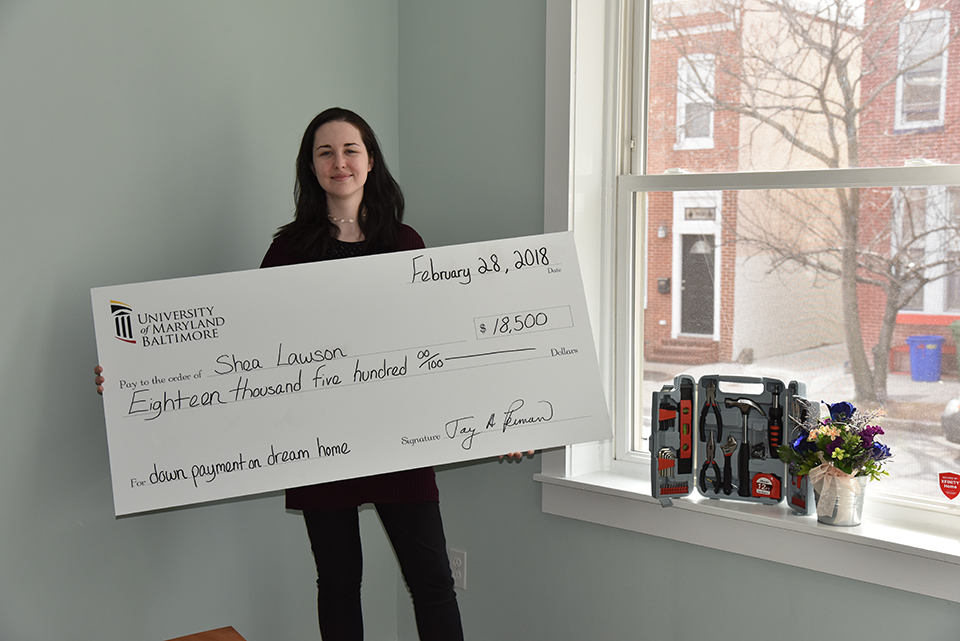 The University of Maryland, Baltimore’s (UMB) Live Near Your Work (LNYW) Program was designed to open the door to homeownership for University employees. In one short year since the program’s relaunch, that door has swung open 20 times, and Dawn Rhodes, MBA, chief business and finance officer and vice president, is thrilled with the results.

“In addition to the 20 people who took advantage of the opportunity to buy a home, I am so pleased with the UMB team and the community partners that made this happen,” says Rhodes, who led the initiative’s upgrade in January 2018 and emphasizes that community revitalization is key to the program’s mission. “Becoming a homeowner and developing equity is a financially transformative life event. It’s phenomenal that UMB can do that for its employees and contribute to the revitalization of Southwest Baltimore at the same time.”

The improved LNYW Program offers eligible employees a UMB grant of $16,000 — plus a matching grant of $2,500 from the city of Baltimore — to help with closing costs and down payments on houses in seven targeted Southwest Baltimore neighborhoods: Barre Circle, Franklin Square, Hollins Market, Mount Clare, Pigtown/Washington Village, Poppleton, and Union Square.

The University’s former LNYW outlay of $2,500 (plus $2,500 from the city) was rarely used, so UMB leaders committed $1.5 million to boost the grant, with more than $320,000 used to date. In addition, the initiative was transformed through community partnerships with Live Baltimore, the Southwest Partnership, and GO Northwest Housing Resource Center to offer homebuying workshops, financial counseling, neighborhood tours, a housing fair, and more.

When UMB President Jay A. Perman, MD, presented the improved program to employees in a kickoff event last January at the SMC Campus Center, he predicted the moves would “change the game.” And they have, especially considering that only four employees received grants under the old LNYW Program between 2013 and 2017.

“When you take into account those types of numbers, this exceeded all of my expectations of the program in Year 1,” says Emily Winkler, Human Resources benefits manager and LNYW Program coordinator, who adds that it was more than the money that moved employees to action. “I feel that the community engagement aspect of the program really sealed the deal with our buyers. Each one I have talked to has raved about their neighbors and this wonderful opportunity.”

Employees from several UMB offices and each of the professional schools — dentistry, law, medicine, nursing, law, and social work — have utilized the program, extolling the benefits of living close to their workplace and owning a home as opposed to renting.

Among the new homeowners:

Heading into Year 2 of the improved LNYW Program, interested UMB employees are encouraged to attend homebuying workshops, offered by GO Northwest, that are scheduled for Feb. 23 and April 27 at the SMC Campus Center, as well as a Live Baltimore-led trolley tour of Southwest Baltimore planned for May 11. The trolley tour proved popular last year, and Rhodes is eager for more employees to get on the LNYW train in 2019.

“To have 20 grant recipients in Year 1 really speaks to the dedication of the core team working on the project at UMB, and I personally would like to double our number the second year,” Rhodes says. “Mayor Catherine Pugh mentions the program often, recognizes Dr. Perman regularly for the program’s success, and challenges other anchor institutions in Baltimore to step up the way UMB has.

“This was the right thing to do in the right neighborhoods, and I think Live Near Your Work is another example of how UMB walks the talk for community engagement.”

The LNYW website has more information on the program’s parameters, application process, targeted neighborhoods, and more.