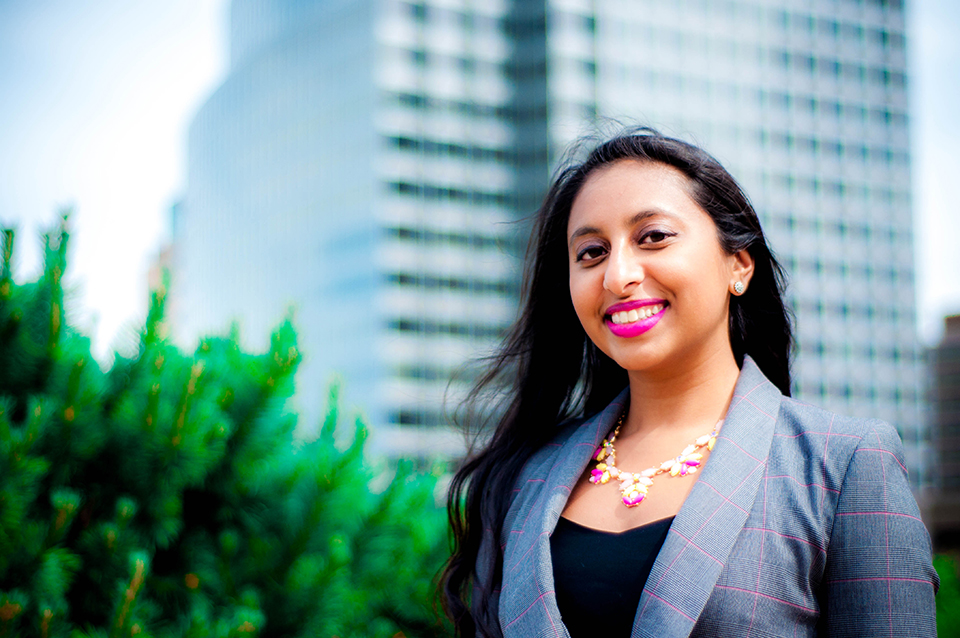 Here’s a look at the student remarker for UMB’s commencement on May 18:

With an impressive array of internships and leadership roles, Aarti Sidhu gained great experience and enjoyed many accomplishments during her three years at the Francis King Carey School of Law.

But in applying to be the student remarker at UMB’s Commencement — and beating out a half-dozen candidates for the honor — Sidhu stressed that what made her a good candidate to speak to the Class of 2018 wasn’t her résumé but the perspective she brings to the lectern.

“As a minority woman in America, and the child of immigrants, I have overcome many challenges and adversities,” Sidhu says. “At every turn, I’ve learned and grown more, into the woman I am today. And UMB has contributed to this substantially.”

Sidhu’s contributions to UMB were substantial, too, as she turned her beliefs into action by advocating for social change, juvenile justice reform, and fair representation for underserved populations – and going the extra mile to do it. She joined Carey Law’s School-to-Prison Pipeline Clinic (now called the Youth, Education and Justice Clinic) in August 2016 and served for four semesters, well beyond the one-semester requirement.

“I’ve been most inspired in my work there,” says Sidhu, who is allowed to practice law under a supervising professor. “We advocate for youth in schools in Baltimore City. Our goal is to do our part to dismantle the school-to-prison pipeline and work to get students the education they deserve.”

Born and raised in Richmond, Va., Sidhu is one of three children of parents who emigrated from India in the 1970s. She earned a bachelor’s degree in criminal justice and psychology from George Washington University in Washington, D.C., and worked as a consultant and a paralegal before arriving at Carey Law in 2015.

In Baltimore, she found many outlets to help people:

“After graduation, I hope to work in juvenile justice and more specifically education,” says Sidhu, who won the Monumental City Bar Association’s Juanita Mitchell Scholarship for her work with underserved populations in Baltimore. “I hope to ensure students are receiving the education they’re entitled to.”

Sidhu also was an active member of the Carey Law community. In her second year, she was chosen as the first chair of the school’s Diversity Committee, a particularly meaningful role because of her passion for diversity and inclusion.

“The committee was created to serve as a liaison to the administration and to work with it to improve our school climate,” says Sidhu, who was an advisor during her third year. “I held a number of events, conducted a schoolwide survey to identify concerns regarding diversity, and set a plan to be carried out in coming years.”

Sidhu also served as secretary of the Black Law Students Association, community outreach co-chair of the Suspension Representation Project, and vice president of the Asian Pacific American Law Students Association. She was selected to the school’s 21-member National Trial Team and was manuscripts editor of the University of Maryland Law Journal of Race, Religion, Gender, and Class.

Sidhu says she couldn’t have taken on these tasks without many other helping hands — “I’m thankful to my support system and those who challenged me and laughed with me,” she says — and leaves her fellow graduates with a simple message:

“Pursue your passions, stay true to yourself, and be kind.”