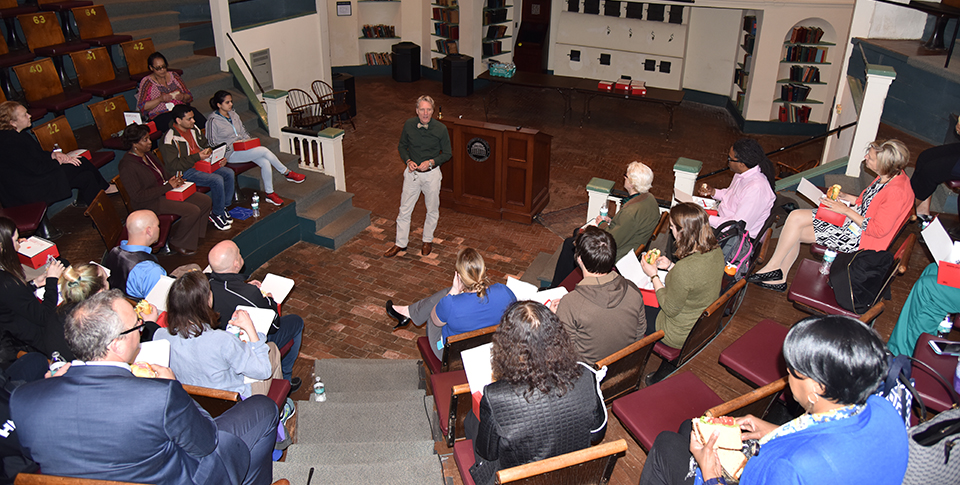 There’s probably nobody who knows the nooks, crannies, and secrets of Davidge Hall better than Larry Pitrof, executive director of the University of Maryland School of Medicine Alumni Association for nearly 25 years.

And if Pitrof has his way, all University of Maryland, Baltimore (UMB) students, faculty, and staff will get to know about the iconic building with the distinctive pillars that are featured in the University’s logo.

Toward that end, on April 24, Pitrof led a group of 30 from UMB through three levels of the West Lombard Street treasure, which dates to 1812 and is the oldest building in the Western Hemisphere continuously used for medical education. It’s a tour he regularly leads, but he’d like to do more.

“If you get a large enough group, I’d be happy to give a personal tour with some advance notice,” said Pitrof, an expert on the venue that was designated a National Historic Landmark in 1997. “We are the heirs to this incredible tradition of excellence. Whether it’s medical, dental, law … we are all part of a proud, rich history.”

Pitrof offered notes on that history and the origins of Davidge Hall during the lunchtime tour, which was sponsored by the UMB Council for the Arts & Culture. Visitors left enlightened and enthralled. In fact, several who previously had been in Chemical Hall on the first floor were not aware of the room above it, Anatomical Hall, which sits below the building’s distinctive dome.

“This is fantastic. I had no idea this hall was in the dome,” said Nicole Willhide, MS, director of student services in the Department of Physical Therapy and Rehabilitation Science at the School of Medicine. “We do our white coat ceremony downstairs, and I didn’t know there was a second lecture hall on top of the first one. This is wild.”

Brian Sturdivant, MSW, director of strategic initiatives and community partnerships in the UMB Office of Community Engagement, agreed. “I’ve heard bits and pieces of these stories but never the whole presentation, which was great,” he said. “I’ve brought plenty of groups of children here, and the kids love it. It’s awesome.”

Kicking Off in Chemical Hall

The tour started in Chemical Hall, where Pitrof spoke while participants ate boxed lunches and sat in the semicircular theater that features 212 numbered wooden seats. Behind him were kiln-like niches built into the front wall that had two purposes — to help medical students conduct experiments (pre-Bunsen burner) and to heat the building.

Pitrof introduced a six-minute video about Davidge Hall, which is named after Dr. John Beale Davidge, the first dean of what originally was called the College of Medicine of Maryland. Pitrof discussed the state of medicine in the United States over two centuries ago, saying it wasn’t a respected field and it was difficult to acquire dead bodies for medical study, so grave-robbing was a common practice.

“Most people at the time believed that when you died, your body served as a repository for your soul and needed to be buried until the end of the world when your fate was decided,” Pitrof said. “Yet here were these crazy medical doctors who were dissecting cadavers, cutting up bodies to educate their students.”

The dissecting room, where those cadavers were worked on, was the next stop on the tour, but now there are live bodies working there, because it serves as the Medical Alumni Association office. The group entered through a door, though originally there was no door there – and no easy entry, which was by design, Pitrof said.

“They wanted to keep this area secret. There were no windows on the side, and the only illumination we had was from the skylights,” he said. “To get into this room, you had to continue going up the stairwell, into Anatomical Hall, and then through a series of doors and a winding stairwell, we believe, that led people down here. Very few suspected there was a room like this.”

Anatomy of a Lecture Hall

The tour moved another 10 steps up to Anatomical Hall, which features rising rows of circular seating, an antique lectern at its center point, and a plaque below that marked the day in October 1824 when Revolutionary War hero Marquis de Lafayette received an honorary degree.

“This hall was used for anatomical instruction,” Pitrof said. “You can imagine the value of a room like this, where a professor could meet a relatively large group of students or physicians and give them a demonstration where virtually everyone would have the same vantage point.”

Pitrof discussed the history of Anatomical Hall’s design, tracing it back to Benjamin Henry Latrobe, architect of the U.S. Capitol, and Maximilian Godefroy, a French architect who designed First Unitarian Church of Baltimore. Pitrof then had tour members take turns standing at the lectern, noting that the hall had “incredible acoustics” and they would experience a sensation as they spoke – and they did.

“The reverberations are all focused right on the center, and you can actually feel it when you stand there and talk,” Pitrof said. “So it was very important for the faculty member to be dead-center in the room, and he could be heard literally whispering if you were in one of the top rows. That’s how well designed it is.”

In the hallways surrounding this area, there are glass-enclosed displays attached to the walls featuring, among other things, Civil War surgical kits, antique eyeglasses, and a cadaver that was used at a 1960 conference at the School of Medicine. “It was so well-preserved, we decided to keep it here,” Pitrof said.

Looking around Anatomical Hall and throughout the building, it’s clear that Davidge Hall needs renovations, with ceiling areas peeling or cracked and visible water damage. A fundraising effort is underway, with the goal of raising $5 million in private donations before asking the state legislature for additional support.

“Our goal is to restore this building to its original, fabulous appearance,” Pitrof said, and the visitors agreed that was a terrific idea.

Read more about the UMB Council for the Arts & Culture, its events, and its programs.

Read more about Davidge Hall and the Medical Alumni Association.