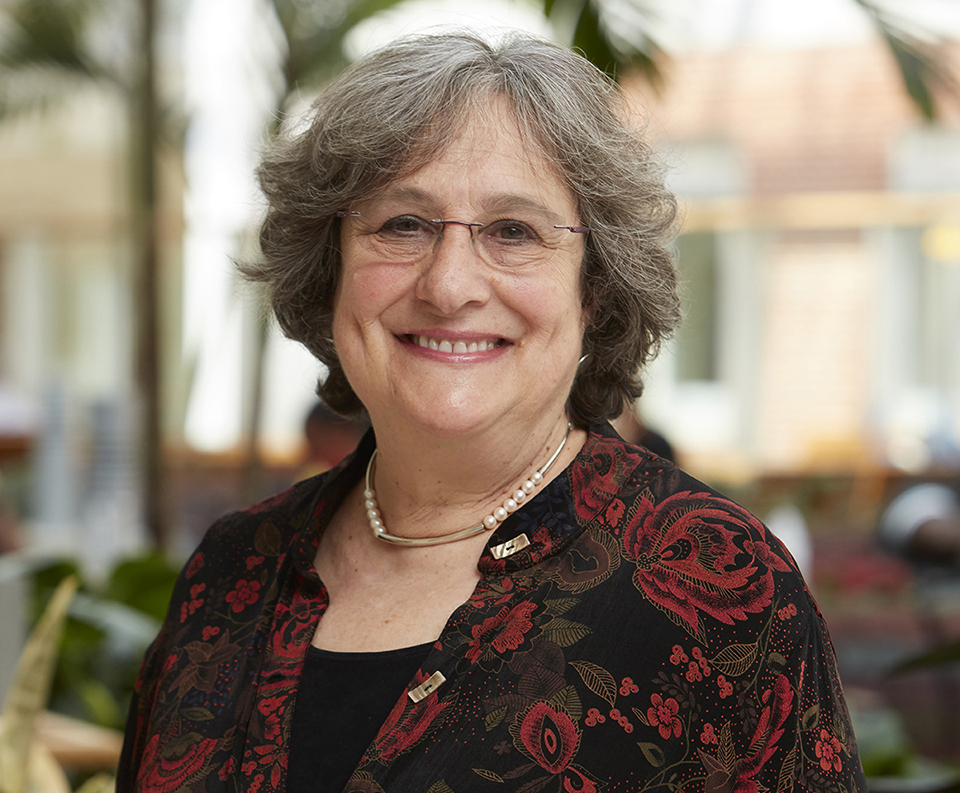 Sign up to attend the Researcher of the Year presentation and reception.

Today: Researcher of the Year

When Karen Kotloff accepted a fellowship at the University of Maryland School of Medicine’s (UMSOM) Department of Pediatrics and Center for Vaccine Development (CVD) in 1983, she didn’t realize she was signing on for a lifetime commitment. That’s just the way it turned out.

“During my fellowship at the CVD, I was exposed to the field of global health,” says Kotloff, a professor in UMSOM’s Department of Pediatrics and associate director of clinical studies for the CVD. “I learned that in addition to treating children one-by-one as a clinician, I could help to introduce public health interventions like vaccines that improve the lives of millions of children at once.

“I began traveling to amazing places, seeing things I never imagined, working next to incredible, dedicated people to solve some of the toughest problems. But what plagued me was that in countries of Africa and Asia, one in every 10 children did not survive until their fifth birthday. Trying to change that became my life’s work and I never looked back.”

Today, Kotloff is an international figure in the field of vaccinology and a leading authority in human controlled infection models for shigellosis, a major cause of diarrhea morbidity and mortality in children.

CVD Director Kathleen Neuzil, MD, MPH, is one of Kotloff’s biggest supporters. “Karen is a pioneer and has performed more Shigella challenge studies than anyone in the world,” Neuzil says. “She modified an earlier challenge model to make it more standardized, reproducible, and safe for participants. The model that she developed is the one currently used throughout the world. She’s a tireless champion for access to vaccines and children’s health around the globe.”

In addition to conducting large epidemiologic studies to understand the causes and health outcomes associated with infectious diseases in children, Kotloff has tested numerous vaccines in adults and children, including for influenza and group A streptococcus. An advisor to the World Health Organization, and author of more than 200 peer-reviewed articles, Kotloff’s research portfolio totals over $50 million.

“My career has really evolved in two intertwined tracks: studying the epidemiology of infectious diseases to understand what causes disease and death in children and conducting clinical trials to test new and improved vaccines to prevent these infections,” Kotloff says. “I have been fortunate to receive funding from the Bill & Melinda Gates Foundation and NIH to pursue both tracks.”

One of her favorite projects took place in Mali, a poor country in West Africa with one of the world’s highest childhood mortality rates. Kotloff has worked there steadily since 2001, conducting a series of epidemiologic studies to understand the causes and consequences of fever, pneumonia, diarrheal diseases, and tonsillitis from group A streptococcus. Whenever possible, she helped to introduce vaccines and other interventions to curb the disease burden and then measure the impact of that intervention.

“I received the Legion of Honor in Mali for our initial work,” Kotloff recalls. “As a result of this project, I met Dr. Samba Sow, who was the coordinator of our field site and is now the Malian Minister of Health. Working with Dr. Sow and his incredible team of dedicated epidemiologists and doctors has been one of the greatest joys of my career.”

“Enormously honored” to be named the University of Maryland, Baltimore’s (UMB) Researcher of the Year, Kotloff says she shares the award with colleagues like Sow, Neuzil, former CVD Director Myron “Mike”  Levine, MD, DTPH, and others. “This award really goes to the group of dedicated, talented physicians, scientists, and health professionals with whom I work every day both here and at the international sites where my projects are conducted,” Kotloff says. “And of course those who have mentored and supported me.”

Asked about the satisfaction she derives from mentoring students, fellows, and junior faculty, Kotloff says, “The Center for Vaccine Development is a very special place with a legacy, extending over 40 years, of one generation of researchers training the next. Because of the stellar reputation of the CVD, we have been able to attract highly qualified fellows and I have had the pleasure of watching these talented individuals grow into highly successful senior faculty. It is extremely gratifying to me to see that they will carry on the work that I find so important.”

Kotloff also is grateful to her family. “I am married with two wonderful grown children, a fantastic daughter-in-law, and two adorable dogs,” she says. “My husband and children have always been very supportive and enthusiastic about my work, occasionally even joining me on a trip. My favorite activity of all is to spend time with my family. I enjoy hiking and kayaking in my spare time. Believe it or not, I also enjoy traveling.”

That’s a good thing, because she has done a lot of it since her first trip — to Somalia in 1993 during a refugee crisis. “It was an experience I will never forget,” Kotloff says. “I saw firsthand the tireless, impeccably organized efforts of a courageous team of Doctors Without Borders providing life-saving vaccines, treatment, and nutritional support to a devastated population and the gratitude that they received in return.”

Saying “it breaks my heart to see a sick child — it is always better to prevent a disease than treat it,” Kotloff also has focused on infections that affect infants and children in the United States. For example, she led a recent study that showed that an antibacterial ointment could be applied to the nose and skin of infants in the Intensive Care Unit to prevent severe staph infections.

After 35 years at UMSOM, Kotloff says there are more challenges to tackle.

“During my career, I have worked to lay the groundwork for introduction of new and underused vaccines in poor countries in Africa and Asia. Now that there are vaccines for many of the major infectious diseases affecting children, those that remain each make up a small piece of the pie. We need to rethink our approach to preventing deaths,” she says. “My current work has turned to strategies that we hope will improve the underlying health and nutrition of young children in these settings so that the children will be stronger and more able to handle the infectious assaults that they face.”

E. Albert Reece, MD, PhD, MBA, executive vice president for medical affairs at UMB and the John Z. and Akiko K. Bowers Distinguished Professor and dean at UMSOM, points out that as of mid-2018, 60 percent of countries in Africa have introduced rotavirus vaccines nationally thanks in part to Kotloff’s efforts. She also has consistently ranked among the top-funded UMSOM researchers for the past five years, he says.

“Dr. Kotloff’s research contributions as well as her mentoring have proven critical in advancing our vaccinology research to the best program worldwide,” Reece says. “She is dedicated to serving the world’s most vulnerable populations and is recognized by her peers as a leader in vaccinology and pediatric infectious disease research.”