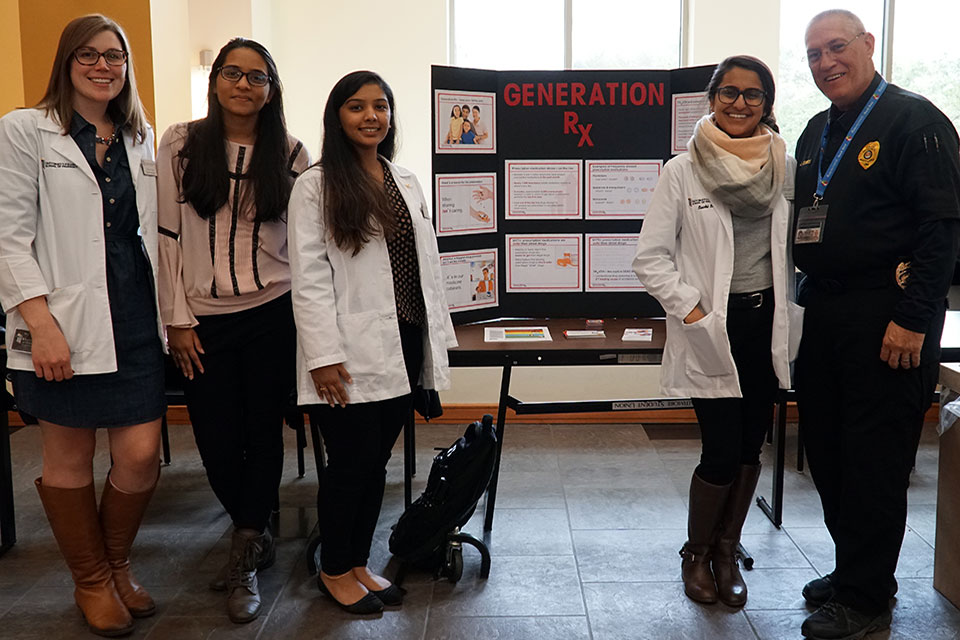 Editor’s Note: This post was originally published on Inside SOP, the University of Maryland School of Pharmacy’s blog. It is reprinted here with permission.

On Wednesday, Oct. 24, and Saturday, Oct. 27, student pharmacists from the American Pharmacists Association-Academy of Student Pharmacists’ (APhA-ASP) Generation Rx joined forces with the University of Maryland, Baltimore (UMB) Police Force and the Drug Enforcement Administration (DEA) to host our bi-annual Drug Take-Back Day at the SMC Campus Center. An initiative started by the DEA in 2010, Drug Take-Back Day has led to the collection of almost 10 million pounds of prescription and non-prescription medications across the United States.

Drug Take-Back Day is a nationwide initiative aimed at addressing a critical public safety and public health issue. According to the 2011 National Survey on Drug Use and Health (NSDUH), more than 50 percent of individuals ages 12 and older received pain relievers, stimulants, and sedatives from a friend or relative for a nonmedical use in the past year, with 5.7 percent of those individuals taking the medication without asking the original owner. By offering a convenient location for community members to bring in these medications, we are helping to reduce the risk of those medications being diverted and protecting our most vulnerable populations from misuse or abuse of these drugs.

Set up in the heart of the UMB campus, the drug take-back boxes are available to the public beginning at 9:50 a.m. These boxes are completely free, anonymous, and open to anyone to use. All members of our community are encouraged to bring in their unused or expired medications for safe disposal. In the three years during which I have participated in Drug Take-Back Day events led by the School of Pharmacy, our group has collected more than 300 pounds of medications for safe disposal. This means those medications are no longer taking up space on people’s shelves and no longer have a chance of being improperly disposed of or detrimentally impacting our environment.

Having been involved in numerous Drug Take-Back Day events during my time as a student pharmacist, I hold these events close to my heart.

As a strong environmentalist, I approached my first Drug Take-Back Day from that perspective, really wanting to pair my environmental background with my future pharmacy career. I was immediately overwhelmed by the outpouring of support not only from the Generation Rx chair at that time, but also from community members, who shared with me their support of those same ideals. Each year, many community members thank us for providing this service, saying that they specifically set aside their old medications to bring to our Drug Take-Back Day events because they want to dispose of them properly and in a manner as safe to the environment and to those around them as possible.

In addition, the 2017 NSDUH reported that 11.4 million individuals ages 12 and older admitted to having misused opioids in the United States — a dramatic increase from the 4.3 million Americans reported to be nonmedical users in 2014. With approximately 115 Americans dying every day from opioid overdose, the U.S. Department of Health and Human Services declared the opioid crisis a national public health emergency on Oct. 26, 2017, which has helped to bring even more light and attention to treating the prevalence of this substance abuse.

When we come together to host Drug Take-Back Day events, it can sometimes feel like we are only taking a small step when compared to the enormity of this crisis, but together these small actions add up to create larger impacts on our communities and among our friends. We start a ripple of awareness, and that ripple carries across communities, counties, and even states.

The October Drug Take-Back Day events marked our group’s 14th year of hosting Drug-Take Back Day events across UMB, a feat we could not have accomplished without the assistance of Cpl. J.R. Jones of the UMB Police, Special Agent Andrew Biniek from the DEA, and all of our amazing student volunteers who took time from their days to make these events possible. Each time I reflect on my involvement in these events over the past three years, I am reminded of the positive impact that Generation Rx has hopefully imparted on the West Baltimore community.