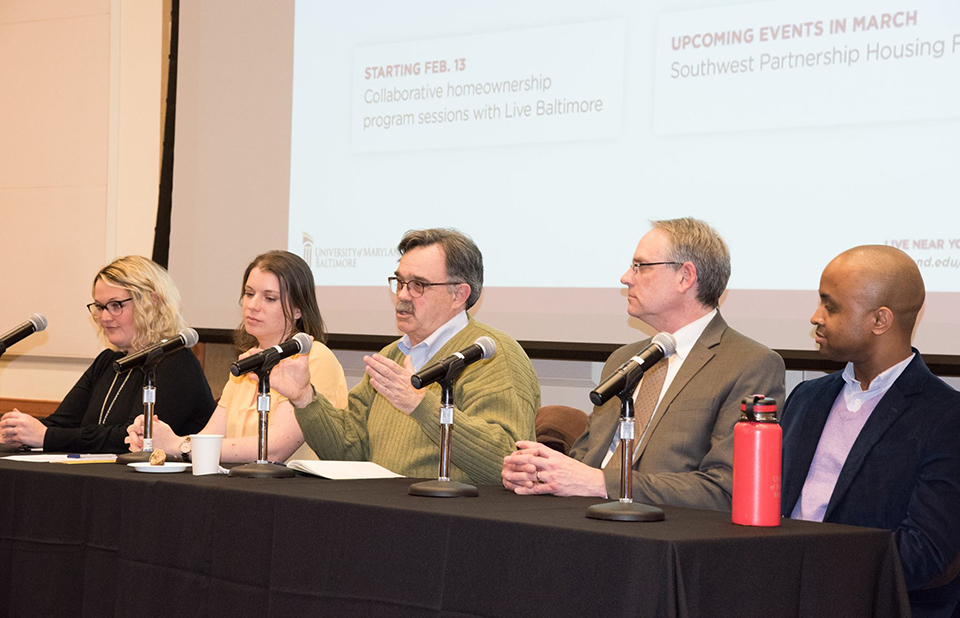 Bill Joyner, MSW ’14, coordinator in UMB’s Office of Community Engagement, knows a thing or two about living and working in Baltimore, so he’s a compelling advocate for the University’s improved Live Near Your Work (LNYW) Program.

Joyner, speaking as a panelist at the LNYW Program’s employee kickoff event Jan. 11 at the SMC Campus Center, extolled the virtues of owning a home in a neighborhood adjacent to campus, describing the commuting, community, and financial benefits he has experienced as a resident of first Hollins Market and now Union Square.

“I’ve been in the area a long time, and I highly recommend living there,” Joyner told a crowd of 60-plus UMB employees. “Your commute is minimized if not eliminated. I can be home in 10 minutes walking, and I don’t have to pay for monthly parking on campus. I also pay much less in housing now that I pay a mortgage instead of rent.

“There’s also something special about living on this side of MLK Boulevard near campus. You don’t just live close to work, you live in a real community where your neighbors actually know your name and you know their name. You get to know the people who own the businesses to and from work, and you stop in and say hello. And the time you had spent commuting, you get that back, and can spend it how you want, which is really important for work-life balance.”

Before the panel took questions, UMB President Jay A. Perman, MD, delivered opening remarks and Dawn M. Rhodes, MBA, chief business and finance officer and vice president, gave an overview of the revamped program, which they both see as a great opportunity for the University to help revitalize and stabilize Southwest Baltimore.

The program offers up to $18,500 in grants ($16,000 from UMB and $2,500 from the city of Baltimore) toward the purchase of a home in seven nearby neighborhoods: Barre Circle, Franklin Square, Hollins Market, Mount Clare, Pigtown/Washington Village, Poppleton, and Union Square. To qualify for the LNYW Program, one must be a regular full- or part-time (50 percent FTE or more) faculty or staff member who is in good standing, complete a homebuying counseling program, demonstrate creditworthiness, and contribute a minimum of $1,000 to the down payment.

Perman said he expects the University’s financial commitment will “change the game” compared with the former LNYW program’s $5,000 grant, which consisted of $2,500 apiece from UMB and the city.

“We’ve dramatically increased that number to $16,000,” Perman said. “I hope that these grants will help many of our employees who are first-time homebuyers and I hope it will make a difference in the community. It is a vibrant, shared community where there are multiple stakeholders. My dream would be to see many of you walking to and from work and to see you out at local restaurants and local shops.”

Perman introduced Rhodes, who walked the crowd through PowerPoint slides that detailed the program’s parameters and partnerships. She said the University’s initial $1.5 million commitment is expected to help 93 employees buy homes.

Rhodes said a requirement that an employee live in the house for at least five years was added to help fulfill the goal of community stabilization – “We don’t want employees flipping these homes; we want them living there,” Perman said — and she added that the onus was on employees to make sure their application is complete before submitting it to the city, which will disburse the grant funds.

Having said that, Rhodes explained that there will be many hands helping applicants navigate the road to homeownership.

“Do not at any point get overwhelmed,” she told the employees. “We have intentionally created partnerships with people who can provide you with answers to any question you have. This is an intricate process, but we’ve got the experts to help you get through it. We would not be here today without the collaboration of our community partners. These people are just as excited as we are about this program, because we’ve been working on this together for the last seven months.”

The panel fielded questions after Rhodes’ presentation, with Kordish describing UMB educational efforts such as Launch Your Life financial planning classes and the community partners discussing events they will be hosting in the coming months to support the LNYW Program.

Live Baltimore will host a trolley tour Jan. 27 that starts at the SMC Campus Center. The narrated tour (free to UMB employees) will take participants around local neighborhoods, including the ones that qualify for the LNYW Program, and features a lottery for an additional $5,000 incentive that can be stacked onto the UMB grant. “We’re really committed to the Southwest Baltimore neighborhoods,” Koontz said.

The Southwest Partnership, which organizes and promotes community-building and revitalization efforts, has scheduled a housing fair for March 24 at the UM BioPark. “We are going to bring together developers who are renovating houses, realtors, and brokers, and you will be able to walk through the door and basically be in the Macy’s of house shopping,” Seipp said. “You’ll be able to see between 50 and 70 houses — some already completed and others that are just shells.”

GO Northwest will host homebuying workshops at the SMC Campus Center on two upcoming Saturdays — Jan. 20 and Feb. 3. Completing the workshop is the first of a two-step process toward earning the homeownership counseling certificate required for program eligibility. The second step is a private homeownership counseling session, which you can sign up for during the workshop.

Ying Zou, PhD, associate professor and director of the Clinical Cytogenetics Lab at the School of Medicine, was gathering information at the kickoff event. She says she lives in Ellicott City, would like to cut down on her commute, and is intrigued by Hollins Market in particular.

“I always wanted to live close to my workplace to avoid traffic,” she said. “One of my best friends lives in Hollins Market. Sometimes we go there for pizza, sometimes we go to the market, sometimes they have art shows in the streets. It’s interesting, and there are a lot of activities in Southwest Baltimore.”

Jimmy Mszanski, MBA, assistant director at URecFit, also was soaking up the LNYW information, saying he was drawn by the idea of owning a home instead of renting and cutting down on his commute from Woodlawn.

“Living just outside of the city, there is traffic and things like that I don’t particularly like,” he said. “But living near work and living within the city, there are more things to do within walking distance, and that’s something that attracts me.”

Learn more about the LNYW Program at its website, which includes application instructions, neighborhood testimonials, and more, and get a list of upcoming events here.

Click here for more coverage of the LNYW launch, and click here to watch a video of the Jan. 11 event.