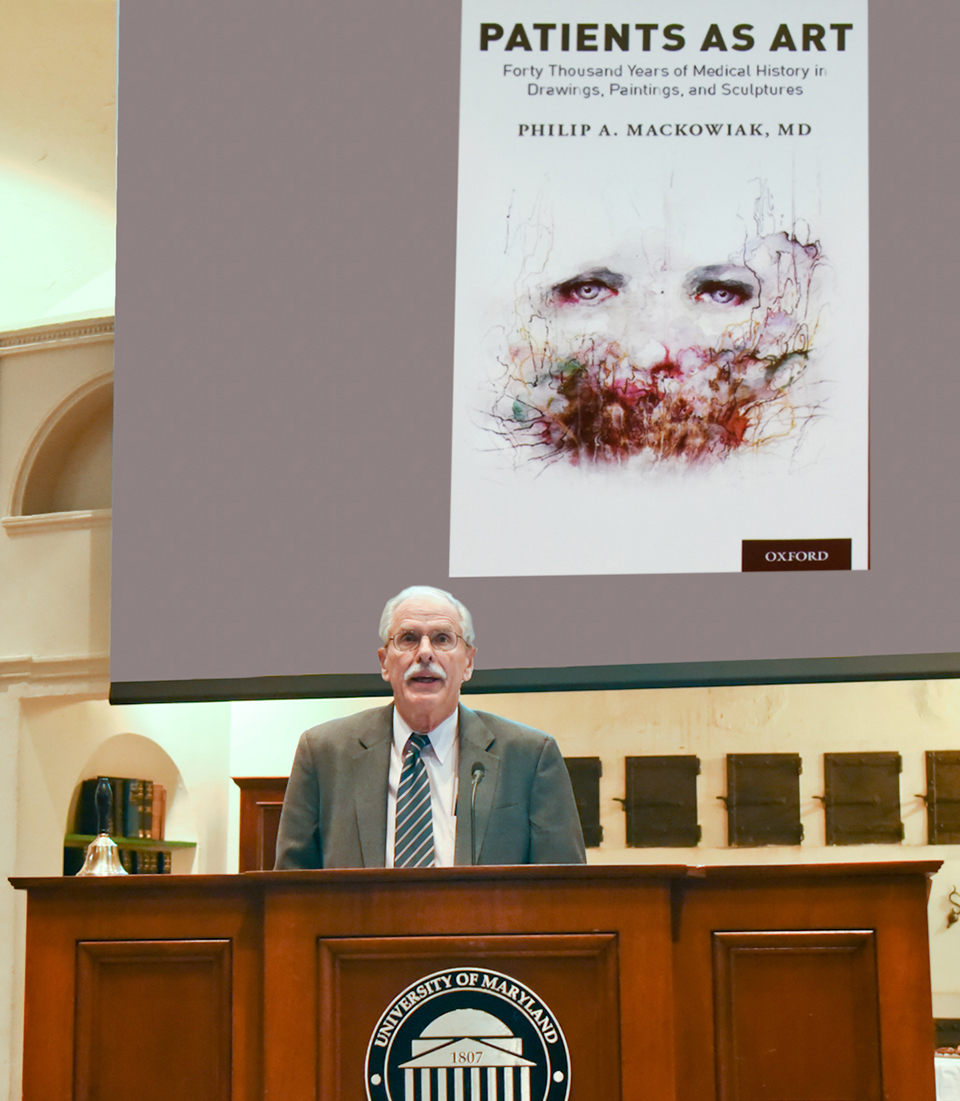 Philip A. Mackowiak, MD ’70, MBA, is more medical historian than art aficionado, but in researching and writing his latest book, Patients As Art: Forty Thousand Years of Medical History in Drawings, Paintings, and Sculptures, he learned a few things along the way.

“Before doing this book, I couldn’t even spell the word ‘art’ — but now I’m an expert, thanks to the internet,” Mackowiak joked before launching a presentation about his new book to a crowd of 60 that included members of the University of Maryland, Baltimore (UMB) community and his family and friends on Dec. 4 at Davidge Hall.

Mackowiak, professor emeritus of medicine and the Carolyn Frenkil and Selvin Passen History of Medicine Scholar at the University of Maryland School of Medicine (UMSOM), delivered background and insight on the book during his half-hour lecture, which was sponsored by the UMB Council for the Arts & Culture. He displayed slides of 10 of the 160 pieces he analyzed from a medical and scientific perspective, ranging from Rembrandt’s famed The Raising of Lazarus to a watercolor titled Pollution, painted by a Canadian artist named Catherine Hennessey.

The watercolor, in fact, is featured on the cover of the book, which spans 244 pages and 10 chapters relating to medical subjects such as nutrition, surgery, mental health, genetics, and death and dying. Pollution is included in the chapter on public health. In the book, Mackowiak describes it, writing, “Hennessey’s image is arresting, shocking, yet strangely beautiful, like the vibrant colors of a sunset viewed through sickening urban smog.” (See photo, above)

“This artist has done a number of really captivating watercolors, but this is the opus magnum,” Mackowiak told the crowd, adding that he was so taken with the painting that he bought it from Hennessey.

Mackowiak continued the lecture with more art analyses and medical diagnoses, including:

Mackowiak’s presentation clearly showed his expertise as one of the most accomplished medical historians in the country, and Patients As Art follows his first two books, Post Mortem: Solving History’s Great Medical Mysteries, and Diagnosing Giants: Solving the Medical Mysteries of Thirteen Patients Who Changed the World.

Since the mid-1990s, he and the University of Maryland Medical Alumni Association have organized the Historical Clinicopathological Conference, which has examined the illnesses or deaths of figures such as Edgar Allan Poe, Abraham Lincoln, Eleanor Roosevelt, Christopher Columbus, Beethoven, and Mozart. The 2007 conference, for instance, determined that President Lincoln would have survived an assassin’s bullet if the R Adams Cowley Shock Trauma Center existed in 1865. The 26th conference will be held in May 2019.

Larry Pitrof, the alumni association’s executive director, noted that when Mackowiak talked about retiring five years ago, two benefactors — Carolyn Frenkil and Selvin Passen, MD — stepped up to fund the doctor’s endowed scholar position. Pitrof thanked Frenkil, who was in attendance, for her support, as well as the UMB Council for the Arts & Culture for its sponsorship of the lecture.

“We’re celebrating an awful lot of history on the UMB campus right now,” Pitrof said, “and it’s our belief that programs like this truly separate the great institutions from the good ones.”

Learn more about the book.