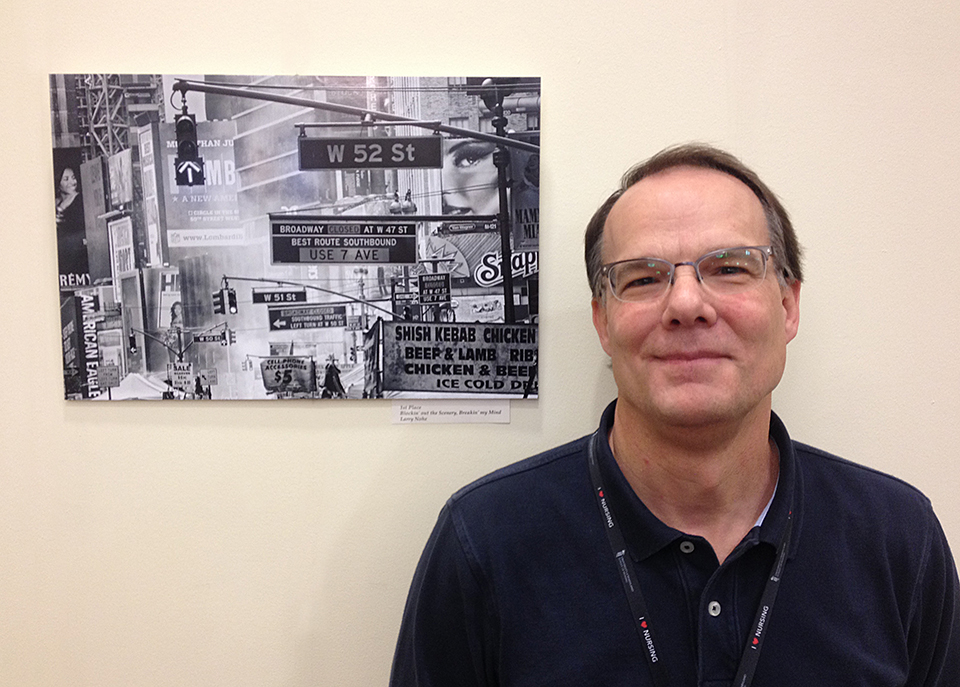 Larry Nohe visits New York once or twice a year and doesn’t mind the hustle and bustle of the Big Apple.

In fact, he relishes it.

“I love New York City,” says Nohe, an information systems engineer at the School of Nursing. “Some people say, ‘Oh, I hate the crowds,’ but I love it. It has this energy that you don’t find anywhere else.”

Feeding off that energy, Nohe took a photo in Times Square that earned first-place honors in the 2017 Snap! UMB Photo Contest, with Nohe submitting the winning entry for the second year in a row. The black-and-white shot titled “Blockin’ out the Scenery, Breakin’ my Mind” — a nod to lyrics from the Five Man Electrical Band’s 1971 hit song “Signs” — shows an intriguing mix of street signs, traffic signals, and advertisements that dominate the city scenery.

“They do street fairs in New York where they close down the streets, and this one just happened to be Broadway,” says Nohe, a UMB employee for 11½ years. “My wife was poking around at one of the stands and I was just kind of taking pictures [with his Canon Rebel], got up on a light post, and shot above the crowd with a long lens. It looked OK in color, but when I switched it to black and white, it was even better.

Nohe, who says he took up photography about 15 years ago, was surprised to win the Snap! contest again and the $25 gift certificate redeemable at the UMB Seven Scholars Store. “Especially after looking at the other entries,” he says after visiting the display in the Fireplace Lounge of the SMC Campus Center. “Some of them are pretty formidable.”

Among those formidable photos were six from Tom Paullin, UMB’s senior director of philanthropy. Paullin had three second-place entries, one third-place shot, and two honorable-mention picks.

One of his second-place photos, “Airplane (Unpainted),” was taken on an overcast day last spring at Martin State Airport in Middle River, Md., which has an aviation museum that features vintage planes. The photo shows a plane’s side windows, part of a wing and an engine, and one propeller, with ominous-looking clouds in the background.

“There’s some neat old airplanes out there, and the unpainted one captured my eye,” says Paullin, who joined UMB last March. “I have a private pilot’s license and my dad was a World War II pilot, so I’ve always been interested in airplanes. I just thought that was an interesting visual, especially on kind of a gray day like it was.”

Paullin says another one of his second-place photos, “Cloudy Saturday in Baltimore Outer Harbor,” was taken on the same day as he ventured back into Baltimore.

“That photo and the airplane shot might have been my two favorites among my entries,” he says. “An interesting part of the harbor is that part where nobody goes, where all the industrial work and the shipping happens. It was one of those rainy Saturdays — I was in town and figured I’d go down with my [Olympus] camera and see what happens.”

Paullin was excited to participate in the Snap! competition, part of the University’s Council for the Arts & Culture. “I think it’s neat that the University has this,” he says of the contest, which drew nearly 240 entries. “It’s a good way to get the employees engaged. I enjoy taking photos when I get a chance, so it was good to see what other people think of them. I’m honored to have made the cut.”

The fourth annual Snap! UMB Photo Contest was judged by Council for the Arts & Culture chair Yumi Hogan, first lady of Maryland; Calla Thompson, an associate professor in photography at the University of Maryland, Baltimore County; and Thomas Jemski and Mark Teske, photographers, videographers, and instructional support specialists at the School of Medicine.

“We had an eclectic mix of photos this year. I’m always pleased with the quality of the images,” says Steve Bossom, MFA, web developer in the Office of Communications and Public Affairs and coordinator of the Snap! contest. “Once again, I offer thanks to all of our judges for their dedication to this contest and for picking the winners.”

The first-, second-, and third-place photos will be on display in the SMC Campus Center until Feb. 24. Or visit the Snap! UMB Photo Contest website.