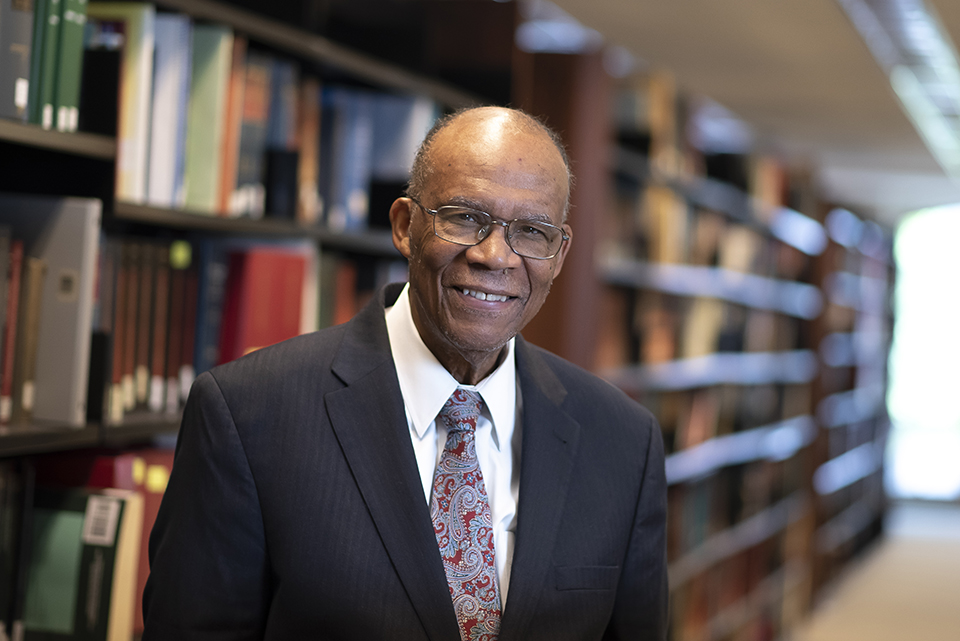 But there’s another role that hits home at the University of Maryland Francis King Carey School of Law, where he teaches: mentor.

“There are countless examples of people who have attributed their success to Professor Gibson,” says Andrew Altshuler, MS, director of alumni engagement in the Office of Development and Alumni Relations at Maryland Carey Law. “He’s always willing to assist students and alumni, no matter their background, in making connections, providing mentorship, and supporting them in any way he can, in a selfless manner, for their betterment.

“As someone who meets with staff and alumni frequently, whenever Professor Gibson’s name comes up in my conversations, it is always in the most positive way,” Altshuler adds. “He has truly impacted many people throughout his career and will continue to do so.”

Gibson founded and organizes the Black Law Alumni Reunion & Symposium, which has been held every five years at Maryland Carey Law since 2003. The most recent symposium, held in September 2018, provided opportunities for former classmates to reconnect and featured an event that honored the founding members of the Black Law Students Association as well as faculty presentations titled “Frederick Douglass’ Escape from Maryland” and “Racial Epithets in the Workplace.”

For his efforts in organizing the symposium, as well as his distinguished career of promoting civil rights and social justice, Gibson earned the University of Maryland, Baltimore (UMB) Diversity Recognition Award as Outstanding UMB Faculty and will be honored at the University’s Martin Luther King Jr. and Black History Month ceremony Feb. 6.

“Ever since Professor Gibson started at Maryland Law more than four decades ago, promoting equality, justice, and opportunity for all has been one of his main goals,” Altshuler said in his nomination. “The Black Law Alumni Reunion is a celebration of the history of  African-American alumni and law students. It highlights the ability to enact change through legal justice both in the Baltimore community and in the world, providing the ability for all individuals to be treated equal. Attendees of the reunion and other alumni who have had the opportunity to learn from Professor Gibson have greatly benefited from being part of his network.”

The seeds of that vast network were planted in Baltimore, where Gibson grew up, earned his high school diploma from Baltimore City College, and was the school’s first African-American class officer. In 1964, he graduated from Howard University in Washington, D.C., where he was the student body president and chair of D.C. Students for Civil Rights. In 1967, he earned his law degree from Columbia University in New York.

He was associate deputy attorney general of the United States under President Jimmy Carter and has run local, state, and national political campaigns, including as Maryland chairman for the Clinton-Gore presidential ticket in 1992.

Gibson’s extensive civic engagement includes serving on the Board of Trustees of the Maryland Historical Trust, as chair of the Commission to Coordinate the Study, Commemoration and Impact of the History and Legacy of Slavery in Maryland, and on the Baltimore City Board of School Commissioners. He also has researched, written, and designed numerous exhibits, articles, newspaper serial stories, and other presentations on the history of civil rights and African-American lawyers in Maryland.

Gibson was the principal advocate for the 2005 law passed by the Maryland General Assembly that renamed the regional airport BWI Thurgood Marshall Airport. His 2012 book, Young Thurgood: The Making of a Supreme Court Justice, was the first to focus exclusively on Marshall’s formative years in Maryland.

In a 2012 Baltimore Sun article about the book, Gibson’s law partner and best friend, Ron Shapiro, said, “It takes people like Thurgood Marshall to change history by changing the law. And it takes people like Larry Gibson to use activism to implement those changes in the streets and homes and lives of African-Americans.”