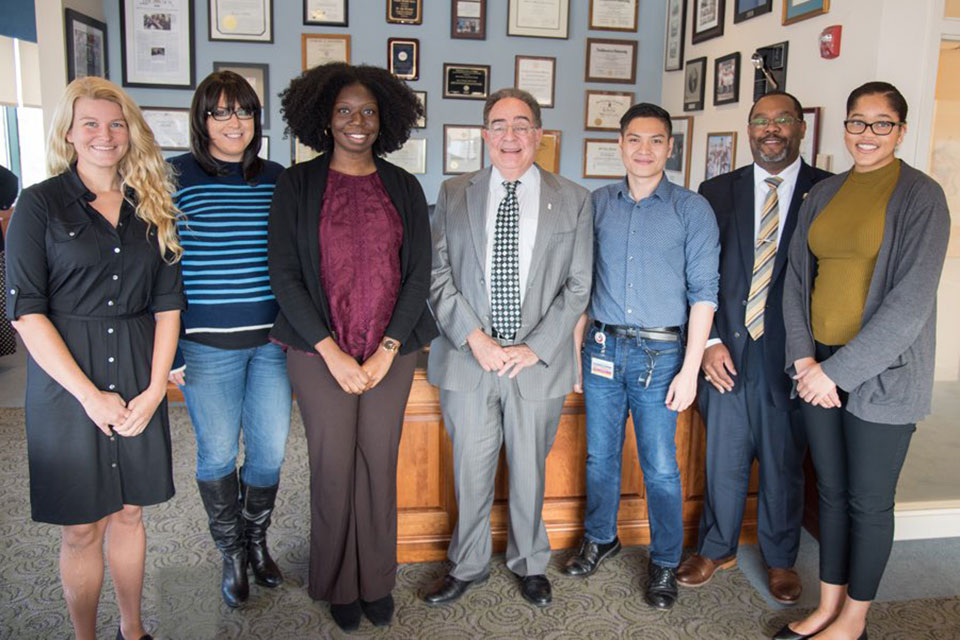 Editor’s Note: This post was originally published on Inside SOP, the University of Maryland School of Pharmacy’s blog. It is reprinted here with permission.

Each year, the National Academy of Medicine (NAM) hosts its D.C. Public Health Case Challenge to promote interdisciplinary, problem-based learning that focuses on an important public health issue facing the Washington, D.C., community. Students from all universities in the D.C. area are invited to participate in the competition, but teams must be interprofessional, and include five to six members from at least three different disciplines.

I first learned about the competition in 2017, when I read about the winning team’s proposal to address adverse childhood events from lead poisoning — a serious issue, particularly in Baltimore City. This year, the topic of the challenge was “Reducing Disparities in Cancer and Chronic Disease: Preventing Tobacco Use in African- American Adolescents.” I knew that I wanted to participate in the challenge and was very fortunate to be recruited by Gregory Carey, PhD, associate professor in microbiology and immunology at the University of Maryland School of Medicine and the faculty advisor for the University of Maryland, Baltimore (UMB) team.

In addition to myself, Carey recruited Jennifer Breau and Erin Teigen from the School of Social Work, McMillan Ching and Dominique Earland from the School of Medicine, and Adrienne Thomas from the Francis King Carey School of Law to round out our team. We set to work as soon as we received the case. We were given two weeks and a hypothetical $2.5 million budget to spend over five years to develop a solution to this complex problem, which was presented to a panel of expert judges during the NAM Annual Meeting in October.

Working together, our team devised a multi-tiered approach that leveraged arts and sports programming to engage middle school students as well as health promotion courses to empower members of the community to make good health care decisions. We titled our proposal “D.C. Health Passport Project,” and employed a community-based participatory research approach to build the program and a mobile app to measure community participation. Data from the app was used to assess community empowerment and incentivize participation in the program.

Our idea was inspired by UMB’s CURE Scholars Program, which recruits health profession students to mentor middle schoolers while also teaching them about better health care practices. We developed a photovoice curriculum for the arts component, which would allow students to capture elements of tobacco use in their communities and how it affected them. At the end of the program, students would have the opportunity to share their project with family, friends, city council members, and legislators.

In addition, understanding that physical activity can help protect children against certain cancers as they age and reduce stress, we included a basketball league into our weekday activities, with a tournament at the end of the season. To include all members of the family — since we know that teens are most influenced by the people closest to them — we incorporated smoking cessation courses to be held at local recreation centers, along with health screenings, health literacy courses, and employment resources. We also incorporated different elements to address societal barriers — such as access to healthy food or impoverished living conditions — that might prevent some individuals from making healthy decisions.

Our goal was to develop a non-traditional approach to addressing health inequities outside of the health care system to show that such solutions can have an indelible impact on communities, as we saw this year in an article published in the New England Journal of Medicine that highlighted a six-month study of a pharmacist-led intervention in black barbershops that was shown to reduce blood pressure among 66 percent of African-American participants in the intervention group (compared to 11 percent in the control group).

Coming Home with the Gold

It was an interesting experience to work so closely with a team of students that I had not met prior to participating in this challenge. Over the two weeks of the case, we spent more than 15 hours brainstorming and strategizing together. It was an incredible team-building experience, and when we were announced as the winners of this year’s competition, I could not have been more thrilled.

As a student pharmacist, I was truly honored to have played a part on the winning team, because I saw participating in this competition as an opportunity to showcase the creativity that our profession can bring to addressing some of our region’s most critical health challenges. Pharmacists should be an integral part of any team that aims to create personal and societal solutions for health disparities. In 2010, the Robert Wood Johnson Foundation Commission to Build a Healthier America noted that medical care can only prevent 10-15 percent of preventable deaths. Helping to address rising drug costs, medication adherence, unhealthy lifestyles, environmental factors, and the health care infrastructure are just a few of the ways in which pharmacists could intervene as members of the health care team.

Pharmacists have the power and the capability to change how Americans interact with the health care system. Being part of the grand prize-winning team at this year’s D.C. Public Health Case Challenge affirmed to me that we are creative thinkers who are well-equipped to partner with other health care professionals to address the challenge of health care reform. I hope to be part of this ever-expanding field as I move forward in my career.