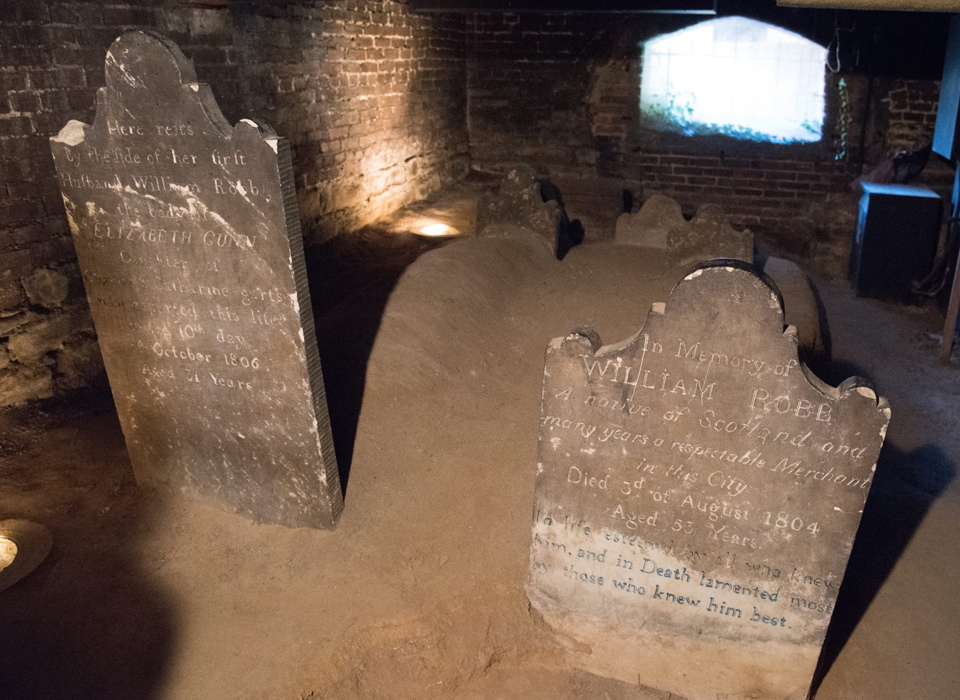 The land of the living and the dead came together during UMB’s guided tour of the Westminster Burying Ground and Catacombs on Oct. 17.

While it may have been a sunny day in the land of the living, only tendrils of sunlight peeked through barred windows beneath the wooden floorboards of this former 19th-century Presbyterian church that shares a city block with the University of Maryland Carey School of Law. Though the crossroads of Fayette and Greene were only a few steps away, faint sounds of traffic barely made their way through the catacombs’ dust-covered brick walls. The modern world seemed distant in this final resting place, making it the ideal backdrop for conjuring the Halloween spirit.

The event, organized by the UMB Council for the Arts & Culture in cooperation with the law school, attracted approximately 40 members of the University community. They gathered in church pews during their lunch hour as Lu Ann Marshall, the historic hall’s tour director for 37 years, regaled the audience with tales of macabre history, tragic deaths, body snatchers, and paranormal sightings.

Aside from serving as the final resting place of famed gothic author Edgar Allan Poe, Westminster Graveyard boasts a frightening history of its own. The catacombs, which Marshall pointed out is technically a covered graveyard, were originally created to ease a grisly problem that plagued 18th-century Baltimore.

“The cemetery was originally established in 1786 because the other Presbyterian graveyard was sliding toward Jones Falls,” said Marshall, who is an academic coordinator for the law school. “This would cause to the bodies to wash into the Inner Harbor. This was obviously disturbing to some people, especially when they knew the person.“

Westminster Presbyterian Church itself was constructed in 1852, more than 60 years after the graveyard was established. The reasoning? “People were commonly buried with their valuables, so they built the church to protect the graves. Kids would sometimes vandalize or kick in the headstones. You know, just kids being kids,“ Marshall quipped, bringing smiles to the audience.

It would be difficult to discuss graves at Westminster Hall without mentioning Poe, but even the most seasoned literary fans were likely to learn something during this tour.

For example, Poe’s grave went unmarked between 1849 and 1875 after a train derailed in a railway accident and obliterated his headstone. “Poe’s was the only headstone destroyed in that accident,” said Marshall, punctuating a long list of misfortunes that the writer endured in life and death. Stories about Poe’s time in Baltimore were a special point of interest for many in the audience, who were eager to ask Marshall questions about his life.

Though the Carey School of Law leads the trust that preserves the church, the University’s connection to Westminster Hall and its catacombs goes far deeper.

“John Davidge believed that the best way for medical students to learn about anatomy was to dissect real human corpses,” Marshall said. Because of prevalent superstitious beliefs, the public was resistant to the idea of dissection, believing that a body must be interred undisturbed to allow the soul to pass into the next world.

In turn, the medical school needed to find more creative means of obtaining fresh corpses. The school’s resident janitor, Frank, would regularly moonlight as a body snatcher. “The original medical school was in walking distance to four graveyards, so I’m sure that was a factor in deciding its location,” Marshall said with a chuckle.

Some bodies were a little too fresh. Much to the horror of the tour’s audience, Marshall revealed that mispronouncing someone dead and burying them alive was not a rare occurrence.

“There are stories of people walking through graveyards and hearing screams coming from the ground,” Marshall said, inducing gasps from her rapt audience.

Listening to such stories, it is easy to understand why graveyards have captured the human imagination as sites of paranormal activity.

Some members of the audience peeked over their shoulders nervously as Marshall told them about the catacombs’ supposed hauntings: a hostile soldier, a ponytailed man, and giggling children (just to name a few).

Multiple ghost hunters and psychics have visited the catacombs, some seeing the same ghostly figures repeatedly. Some touring guests also have seen a spirit or two. As for Marshall? “I’ve never seen a spirit myself. If I did, I certainly wouldn’t be working here anymore. But there are rooms I won’t go into alone,” she said.

Marshall closed the tour by allowing attendees to explore the catacombs and give the graves a closer look. Some graves were covered in giant stone slabs, which Marshall said were used to “keep the bodies from floating out of the ground during heavy rain,” while others were buried under monumental piles of old soil with rusted doors on their sides. Many of the graves also were marked with informative plaques.

The crypt was a special brand of eerie, with a claustrophobia-inducing low ceiling, multiple headstones huddled together, and a deep well that was meant to provide drainage to the catacombs. “The well doesn’t work very well. Once I was giving a tour after a big storm and there was a small coffin floating in the crypt,” Marshall said.

Overall, the guided tour of Westminster Hall’s Burying Ground and Catacombs offers something for everyone. It is part history lesson, part architectural study, part campfire tale, and more.

Miss the opportunity to explore this unique place right on campus? The Annual Halloween Tour is scheduled for Oct. 31 from 6 p.m. to 9 p.m. You also can view the silent classic The Phantom of the Opera (1925) as part of the law school’s “Lunch Under the Pipes” series Oct. 26 at noon.
— Jacquelyn White

Learn more about the upcoming events at Westminster Hall here.